Global Asia, a publication of the East Asia Foundation in Seoul, said the previously secret U.S. documents show that South Korea continued to develop nuclear weapons at least two years after Washington thought it had ceased during the 1970s.

Such a past can help shape sensible policies in the current regional efforts to rein in North Korea’s nuclear program, scholars Peter Hayes and Chung-in Moon said in the Global Asia September issue.

Chung, Global Asia’s editor-in-chief and a professor at Yonsei University, and Hayes, director of the Nautilus Institute and a member of Global Asia’s editorial board, claimed Seoul’s former nuclear ambition was “largely triggered by eroding or ambiguous security assurances from Washington.”

The uncertainty left the late President Park Chung-hee wanting the country to have its own nuclear deterrent, they said in the article. 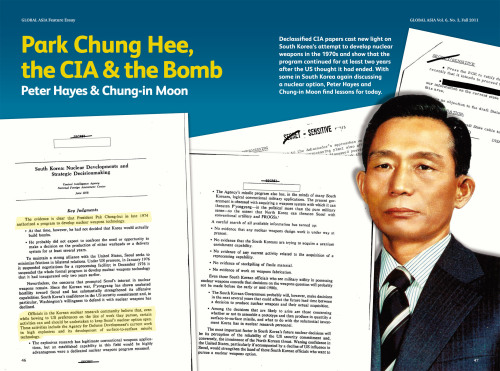 First, the Park government engaged in considerably more proliferation of missiles and fissile materials and related technology than previously thought. Most historians of this period believe Park, under pressure from the U.S., halted the South’s nuclear program in 1976. The documents reviewed by Global Asia show that the program continued as late as 1978.

Second, Park’s efforts to make South Korea less dependent on U.S. military support through its nuclear weapons program put dangerous stress on the alliance, and wasted tremendous South Korean political capital with its American partner, while providing the South with very little in terms of actual nuclear technology or weapons.

Fifth, given the arguments currently being made by some in South Korea about the need for the South to develop its own nuclear weapons in response to the North’s nuclear weapons program, the CIA documents reviewed by Global Asia raise the question whether such a policy would lead the South into the same cul-de-sac that Park’s policies did.

Global Asia is a journal of international affairs published by the East Asia Foundation, a non-profit organization registered with South Korea’s Foreign Ministry in 2005.

The magazine aims to provide a compelling, serious and responsible forum for distinguished thinkers, policymakers, political leaders and business people to debate the most important issues in Asia today, according to its web site www.globalasia.org.