Just a decade ago, the place was a quiet residential area. Then, coffee shops started springing up.

The pace quickened about a year ago, spreading the word that the area might very well become the next Garosugil, a hip hang-out for artists and like-minded creative spirits.

Right now, it is too early to draw comparisons. The place still retains a tranquility in keeping with its residential surroundings.

Yeonhui-dong was christened its current name in 1946 according to the Yeonhui-dong Resident Center’s official website (yh-dong.sdm.go.kr/yh-dong/).

The name, Yeonhui, is believed to originate from the place where its neighbor, Yonsei University, currently stands. That turf is believed to have once been the grounds of Yeonhui Palace.

Not only does the area’s name boast royal origins, according to the website, it was even considered a candidate for the Joseon Dynasty capital during the reign of its first king, Taejo (1335-1408).

Yeonhui-dong transformed into a residential area during the 1970s. It wasn’t until the 21st century that it started to sprout coffee shops that many believe cater to the artists who live and work in the area.

Indeed, Jennie’s Coffee House owner Han herself runs an interior design company, Shin Hwankyeong Design, with her husband, which moved to Yeonhui-dong before they opened their cafe below it, and the interior designer of Yeonhui-dong’s new fusion Italian restaurant Qwymin’s Table, Qwymin Kim, 46, has been living and working here for six to seven years.

The fact that Seoul Art Space_Yeonhui, a writers’ enclave created by the Seoul Metropolitan Government and run by the Seoul Foundation for Arts and Culture, is also located in Yeonhui-dong, further amps up its artistic reputation.

While the area may house many a creative spirit, Yeonhui-dong is not yet a full-blown bohemian hang-out. It feels more like a hideaway right now, with a series of establishments ― primarily coffee shops ― interspersed around SARUGA Shopping Center.

Clearly, Yeonhui-dong’s cafe culture is just beginning to blossom, and that seems to be one of its major charms.

The area is secluded, verdant and slow-paced, affording the worn-out city-goer an opportunity to stroll, sip and gaze at the trees, and if one comes early enough, listen to the crickets and birds in what seems like an impossibly pastoral setting.

It was precisely that peaceful quality that brought Lee Ji-eun, 48, and Kim Youn-joo, 40, co-owners of sewing atelier Nemo e Ggoom, to set up shop here.

“At first we were located in Yeonnam-dong,” said Lee. “Then late this April we moved here. We liked the atmosphere.”

“This area gets busy on the weekends,” she said, adding how that started to happen about a year ago.

Both Kim and Lee, however, believe that Yeonhui-dong will not get up to the busy, bustling pitch of Garosugil.

“I like it here because it is relaxed,” said Lee. “I don’t think it will change too drastically because there are still people living here.”

Wedged in between several shops on a small street corner, Nemo e Ggoom fits in perfectly with its surroundings.

Nemo e Ggoom offers visitors a peaceful space where they can sew to their heart’s content.
On a weekday afternoon, women gather to sew, exchanging friendly words while focusing on their pieces. Outside, the trees rustle softly, giving a woodsy ambiance to the homey setting.

Jennie’s Coffee House owner Han remembers a time when the area was even quieter.

It was the winter of 2003. Han decided to open one of the neighborhood’s first coffee shops simply because there were no cafes near the interior design company (also located there) where she worked and she wanted a great brew.

“There was nothing,” she said.

“At first we had about two customers per day.”

Not one to compromise, she stood her ground, sourcing beans imported from the United States that were then roasted fresh every three days in Korea by her supplier. 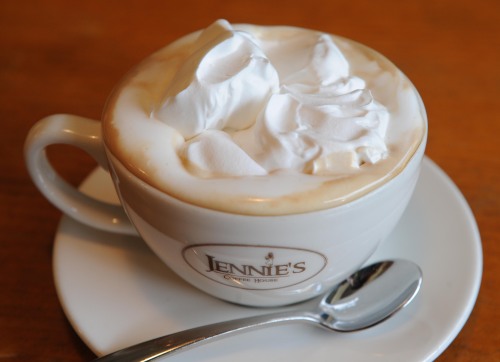 Jennie’s Coffee House whips up a decadent Vienna coffee, topped with luscious gobs of in-house whipped cream over a strong, plummy brew made from freshly roasted beans. (Lee Sang-sub/The Korea Herald)
Eight years later, Jennie’s (which is named after Han’s daughter) is still in business, dishing out perfectly-rendered Vienna coffee topped by gobs of cool in-house whipped cream over a strong, deep brew. Her menu has expanded to include delicious handmade chocolates and a simple crust-less cheesecake dressed up with a generous blueberry topping.

No longer alone, Jennie’s is flanked by a row of establishments. Houses still remain on the other side of the road, preserving the quiet aura of the area.

Han likes it this way. She seems to even wish that it was less crowded.

“The tranquility of this road has vanished,” she said.

Han, however, is open to change, as long as it is for the better, and, for better or worse, Yeonhui-dong is changing.

In fact, just a two minute walk away, a new restaurant, Qwymin’s Table, is slated to open on Sept. 24. 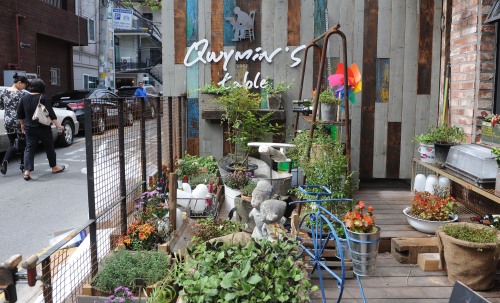 Newcomer Qwymin’s Table is bringing fusion Italian to Yeonhuidong starting Sept. 24.
The establishment’s interior designer, Qwymin Kim, after whom it is named, believes there is a dearth of substantial-sized Italian restaurants in the area, though Yeonhui-dong sports a wealth of Chinese restaurants on the main thoroughfare.

Kim is looking forward to the opening of the new Italian fusion restaurant, which he has infused with a vintage vibe. Kim also believes that the current cafe street will continue to grow.

While Qwymin’s Table may signal more new restaurants and shops to come, for now Yeonhui-dong is still a quiet hideaway.

On a late morning weekday, one can hear crickets chirping from the veranda of Yeonhui-dong’s Cafe 129-11, while music pours out throughout the beautiful cathedral-like space. 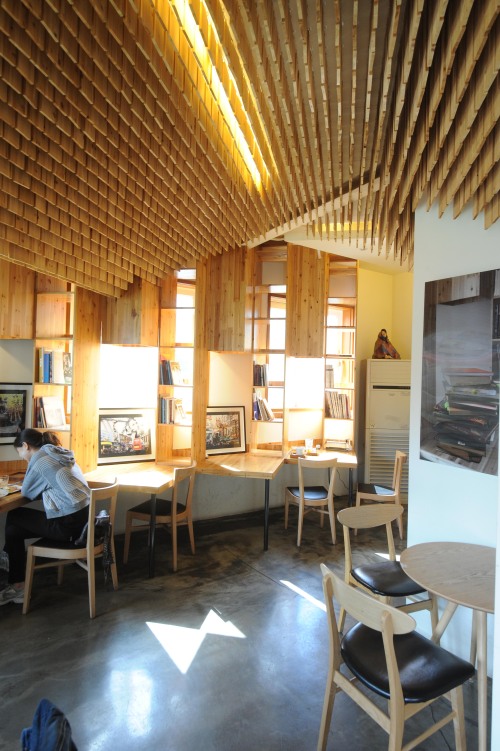 Patrons can study in private at Cafe 129-11. Wood panels hang in arches from the ceiling to help funnel sound throughout the space.
Small wooden panels hang from the ceiling of the coffee shop, forming arches, which manager Kim Dong-myeong said acts as an acoustic funnel for sound.

“The cafe is an affiliate of the YHD art and management projects gallery,” he said, referring to the gallery nearby.

In keeping with its artistic connections, the cafe acts as a gallery and library, with art hanging on the walls and magazines and books sitting in shelves over individual study spaces.

Buttery French toast, all custardy in the middle and crisp around the edges, and coffee brewed using a special Japanese KONO coffee dripper are served up at the establishment.

It has been a little over a year since the coffee shop opened and manager Kim says the area was quiet the first three to four months then started getting busy on the weekends.

Kim, however, expressed concern over the possibility that the current peak in public interest might just fritter away.

“For this to become something more than a fad people really need to blog about it,” he said.

Blog they may and set the neighborhood abuzz with visitors, but even now, in its quiet, secluded state, Yeonhui-dong boasts a bohemian bonhomie that simply cannot be found elsewhere.

To get to Yeonhui-dong cafe street go to Hongik University Subway Station Line 2, Exit 9 and grab a taxi to SARUGA Shopping Center or take Exit 5 and board bus 7612 and get off after the fourth stop at Yeonhui A Area Apartments Stop and walk downhill to the Yeonhui Post Office, turn right and cross the street.