[ The Korea Herald – Send E-mail ]
Saturday concert to be ‘luxury gift set’: Sumi Jo
By
Published : Sep 23, 2011 - 19:17
Updated : Sep 23, 2011 - 19:17
Coloratura soprano Sumi Jo said her concert on Saturday evening at the Olympic Park’s outdoor stage will be a “luxury gift set” because audiences will be able to see world-renowned artists in different musical fields perform together in harmony.

The concert program will include a variety of opera arias under the theme, “songs of gypsy and bohemians,” such as “Gypsy Carmen” in Bizet opera “Carmen,” “I Hear the Sound of Cymbals” in Lehar operetta “Gypsy Love” and “Oh Lovely Maiden” in Puccini’s “La Boheme.” 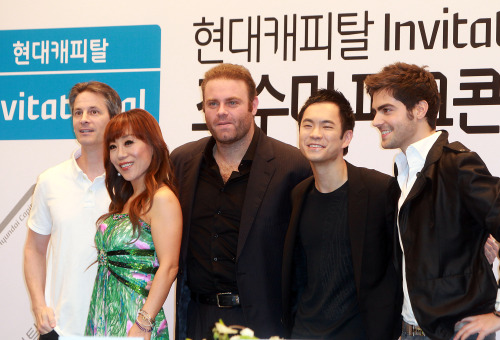 Conductor Seven Mercurio (from left), soprano Sumi Jo, tenor Joseph Calleja, violist Richard Yongjae O’Neill and guitarist Milos Karadaglic at a press conference in Seoul, Friday. (Yonhap News)
“This concert will be like a gift set of luxury musical performances, presented by top artists with a well-known program for a large audience,” Jo told reporters at the head office of Hyundai Capital in Seoul.

“I put top priority in making sure not to amplify operatic vocals at the outdoor stage because I’ve seen some audio problems at outdoor concerts recently in Korea.”

Jo added that she will be wearing four dresses designed by young designer Seo Seung-hyeon, as she no longer can wear new dresses by late designer Andre Kim.

Mercurio said Jo’s tremendous amount of practice and sacrifice to dedicate her whole life to music make her unique and special.

Karadaglic, who will perform with Jo for the encore on Saturday, said he has been a huge fan of Jo and was excited to join her on the stage. The guitarist plans to hold a showcase at the Olleh Square in Gwanghwamun on Monday.

After the press conference, Jo donated 150 million won ($125,650) to the Beautiful Foundation and Korea Animal Rights Advocates to help them establish an education center for animal rights protection.