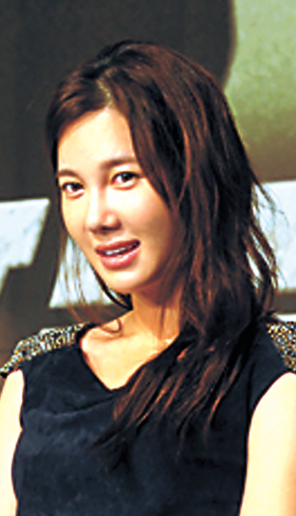 E Ji-ah (Ahn Hoon/The Korea Herald)
Actress E Ji-ah, who took a break from her entertainment career in the aftermath of news reports of her secret marriage, divorce and legal fight with musician Seo Tai-ji, will come back to the small screen for MBC drama “Me Too, Flower!” the broadcaster and her agency said.

She will play the role of police officer Cha Bong-sun who falls in love with a tycoon Seo Jae-hee who secretly moonlights as a parking attendant at a luxury brand shop. The male lead role will be played by Kim Jae-won, MBC said.

“We were worried about the timing of her comeback. But the drama and her character were very attractive and we thought we could count on the writer and the producer,” E’s agency KeyEast said.

E’s legal wrangle with Seo ended in July as she withdrew her law suit. She had initiated a suit in January requesting 5 billion won in a property settlement and 500 million won in alimony from her former husband.