Ssangyong Motor has set the goal of pulling up its market share in the local sport utility vehicle industry to 20 percent within five years, from the current 14 percent.

The automaker unveiled the local market share target during its “new vision declaration ceremony 2011” at the Yi-Choong Culture Center in Pyeongtaek, Gyeonggi Province, on Tuesday.

Ssangyong said that it would achieve 4 trillion won in yearly revenue with yearly sales of 160,000 vehicles by 2013.

Ssangyong said it would expand its sales infrastructure in Korea and is seeking a way to establish a domestic hire-purchase finance company.

With these and other marketing and brand initiatives, the carmaker is targeting to grab 20 percent of the local market in the SUV sector, company executives said. 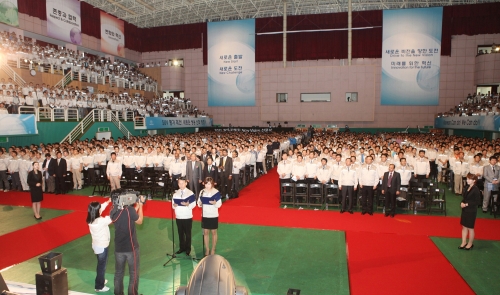 Ssangyong Motor holds an event to unveil the automaker’s new vision and strategies at the Yi-Choong Culture Center in Pyeongtaek, Gyeonggi Province, on Tuesday. (Ssangyong Motor)

To accomplish the goal, Ssangyong is considering launching five facelift models by 2013 and four completely new models by 2016. The company also said it would develop and launch electric vehicles.

“Today we have taken a giant step in the march toward reclaiming Ssangyong’s rightful place as a key player in the global automotive community,” company chairman Pawan Goenka told 3,300 employees who attended the ceremony.

Company CEO Lee Yoo-il said, “The goal we have set may be challenging, but given the tenacity and determination of the Ssangyong team, I am sure we will achieve it.”

It plans to cooperate with its majority shareholder Mahindra & Mahindra Ltd., in strengthening its overseas sales network and advance into fast growing emerging markets.

To begin with, the carmaker will commence using India-based Mahindra’s existing network in South Africa by March 2012, the company said in a statement.

Mahindra & Mahindra and Ssang­yong are looking for joint-marketing opportunities in emerging markets. They regard Africa as the next frontier for automotive growth.

Company executives said Africa was comprised of very diverse markets that range from the mature market of South Africa to the rapidly expanding ones of oil-rich nations.

With Mahindra’s assistance, Ssangyong is poised to move to local manufacture of its vehicles in India and Egypt.

Ssangyong and Mahindra will cooperate across the value chain, especially in R&D, product development, purchasing and sales to generate economies of scale for mutual benefit that shall significantly enhance Ssangyong’s cost competitiveness, the company said in a statement.

“In addition, we will implement strategies for targeted reductions in engineering, production and warranty costs using innovation as a key driver,” a spokesman said.

He said the new vision is to become the “most innovative and respected Korean automotive company.”

The company also said in a statement that “the new vision embodies its effort to drive positive change in the lives of its customers by providing differentiated products and services resulting in high customer satisfaction through innovations in the areas of process, technology, customer value and service.”

Ssangyong labor union leader Kim Kyu-han, who participated in the ceremony, said that the new vision and strategy will motivate employees to focus on customers and innovatively strengthen internal capabilities.

“The union will make ceaseless efforts towards new challenges based on a win-win culture,” he said.