While idol-centered K-pop has been heavily covered by the media, the Korean indie scene has received relatively little attention. This is the ninth installment of a series of interviews shedding light on the scene. ― Ed.


They almost never stay quiet or calm, just like rabbits.

Jung Da-woon and Jung Hye-sun, the members of the female indie duo J Rabbit, filled the photo studio of The Korea Herald with giggles and jokes on how they should pose for an interview photo.

The two Jungs, both born in the Year of Rabbit, in 1987, met in a tutorial music class of the Seoul Institute of the Arts in 2007 to collaborate on group homework and decided to pursue a musical career together. The name J Rabbit is a combination of the initial of their surname “J” and their birth year, “Rabbit.”

“The fundamental message we try to embody in our music is love. Based on love, we tell the stories of hope, joy, sorrow, depression, peace and blessing in our lives,” said Jung Da-woon, who mostly composes J Rabbit songs and plays diverse musical instruments including piano, acoustic guitar, cello, violin and even marimba.

“Our fans often say that we are like their friends because they find it comfortable and enjoyable to listen to our songs. We wish people could listen to our music and think that the world is still a beautiful place to live,” said Jung Hye-sun, whose vocals are known for a crystal clear tone.

Their messages of love and hope came from what they had experienced before they debuted in 2010 with single album “Take One.”

In 2007, the duo started searching for a caf with a live concert hall where they could perform but most of the caf owners said either that they were too young or that their folk music was “sleepy and too quiet.” 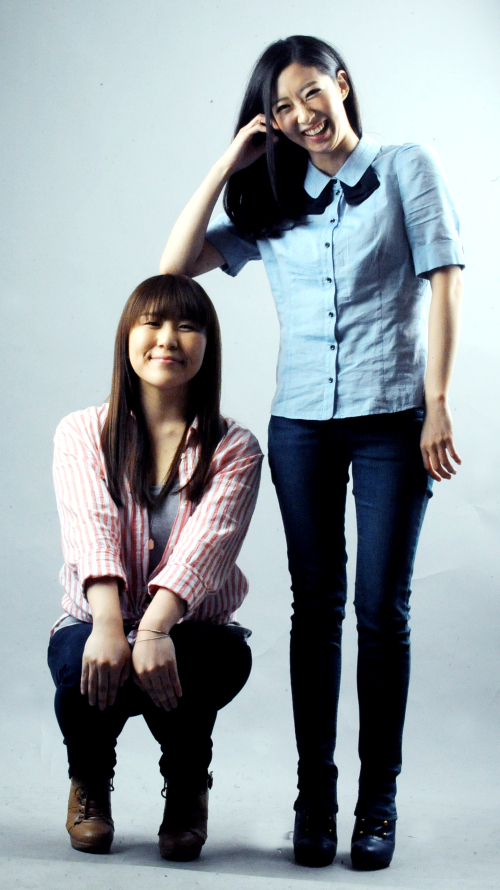 J Rabbit members Jung Da-woon (left) and Jung Hye-sun pose for a photo. (Park Hyun-koo/The Korea Herald)
Finding it difficult to build a career as a musician without much experience, Da-woon went to Australia for six months and worked as a part-time piano player at a hotel lounge and performed at nursing centers from time to time.

Hye-sun transferred to Kyunghee University as a postmodern music major in 2009 to study music at a deeper level.

Then, in summer 2009, they rented a room in Hongdae area to pursue music seriously. But Da-woon’s musical instruments, including her precious keyboards, were all damaged by mold during the rainy season.

The incident led Da-woon to ask for the urgent help of Lee Dong-hyun, lecturer at the Seoul Institute of the Arts, who is now producer of J Rabbit under the name H Cube. H Cube, operator of a music project website friendz.net, offered the two a music project.

“In hindsight, we were able to do music with H Cube thanks to the mold,” Da-woon said.

As an ardent MacBook Air user, H Cube uploaded online reviews about working on music with diverse IT gadgets together with MacBook. To show how it works, he used YouTube video clips of J Rabbit performing together.

“People around me checked their performance and said J Rabbit is quite good. Their biggest strength is that they have fun doing the music and it really shows,” Lee said.

As Hyes-sun’s quality vocals and Da-woon’s versatility on musical instruments got attention through word of mouth among Internet-savvy Koreans, the duo released not only their own songs but many cover songs on YouTube.

Finally, they released their first studio album in early 2011.

One unique aspect of their album is that the duo recorded each track in one take, as opposed to other musicians who generally divide a song into many parts and separately record them. Thanks to the one-take method, each song was video-recorded and uploaded on friendz.net and YouTube. To do a one-take recording, they had to practice the song over and over again.

Their most popular songs include “Yojeum Neo Marya” (These Days You’re), “R U Tired?” and “Love Is So Amazing.”

“We’re now preparing diverse concerts for the upcoming Christmas season and plan to release a second album early next year. While doing those things, we will keep uploading video clips on YouTube to share our music,” Hye-sun said.