Registrations rose 7.8 percent to 787,435 vehicles from 730,646 units a year earlier, the Brussels-based European Automobile Manufacturers Association said Friday in a statement. That narrowed the eight-month sales decline to 1.1 percent for a total 9.19 million registrations.

VW models introduced in the past year include a new version of the Passat mid-sized car and a revamped Audi A6 sedan, while Ford is selling a new Focus car. Consumer confidence in Germany, Europe’s biggest auto market, was higher in the first half of 2011 than a year earlier, according to figures from GfK SE. The market-research company is predicting a confidence decline as European leaders struggle to stem a sovereign-debt crisis. 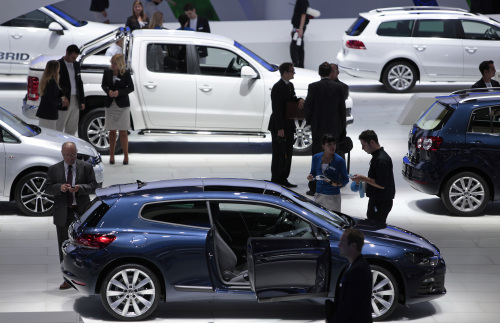 Visitors look at Volkswagen AG automobiles displayed on the company’s stand during the Frankfurt Motor Show, in Frankfurt, Germany, on Tuesday. (Bloomberg)
“These cars were ordered months ago, so I wouldn’t expect a material impact from the new crisis at this stage,” and “what’s more important is what we see in October and November,” said Arndt Ellinghorst, a London-based analyst at Credit Suisse. “The consumer was in a far better mood when he ordered the car earlier this year, so we have to wait to see how the order momentum, which is clearly slowing down, affects sales later in the year.”

GM’s European registrations gained 5.2 percent to 64,669 in August, propelling the Detroit-based carmaker’s eight-month deliveries in the region to a 1.8 percent gain. Orders at the carmaker, whose new models include the Meriva minivan and Astra Sports Tourer, have been unaffected by the region’s sovereign- debt crisis, Nick Reilly, the head of the company’s European unit, said on Sept. 13.

Fiat SpA (F) was the biggest loser among the European mass- market automakers, with August sales in the region dropping 7.6 percent. Chief Executive Officer Sergio Marchionne said on Sept. 13 that Fiat’s home market of Italy is at its weakest since the 1980s.