Though China-based Zhejiang Geely Holding Group completed acquisition of Swedish-founded Volvo Cars from U.S.-based Ford Motor in the third quarter of 2010, Volvo Cars Korea has not corrected the fact on its homepage (www.volvocars.com/kr).

As of Sept. 18, 2011, the Korean unit still offers incorrect information on the majority shareholder in Korean language, as it reads that “Ford Motor has been holding a 100 percent stake in Volvo Cars since 1999.”

The homepage also says, “If you want to access detailed information (on our shareholding structure), visit www.ford.com or www.media.ford.com).”

“The company might have simply delayed the process of update,” an industry source said.

“But any company deserves to be criticized if it glossed over fact-correcting on its shareholding structure for one year.”

He said that kind of neglect could be regarded as a critically unfair practice in the local automobile market, mentioning sensitivity among Korean consumers over “nationality” of import brands.

Websites for Volvo Cars in major regional operations, such as the U.K., U.S., Canada and Australia, do not say that Ford is the biggest shareholder of the carmaker. But they also have not specified the fact of Chinese ownership.

Volvo, which had secured a certain portion of market share in Korea for top-level vehicle safety, has been losing its ground over the past few years.

Its slump is still underway in 2011 while other major foreign carmakers have been enjoying steady growth in sales.

Volvo’s weaker position is attributable to weakened customer confidence in its vehicle safety due to frequent recalls from manufacturing defects, industry sources said.

In June, Volvo Cars Korea recalled the S60 and XC90, according to the Ministry of Construction and Transportation.

The recall applied to 182 S60 vehicles produced between June 22, 2010 and May 18, 2011 that have faulty fuel pump controlling software that could cause the engine to be switched off while driving. 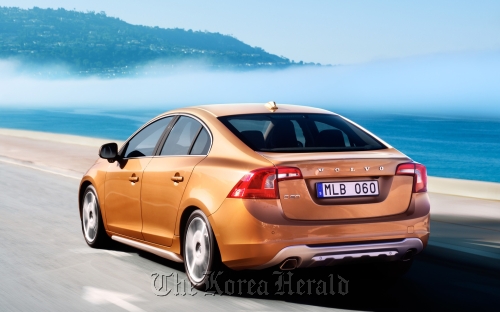 Volvo S60 sedan
In addition, six S60 vehicles produced between Jan. 20, 2010 and Jan. 28, 2011 were found to have faulty connection in the fuel supply system that could lead to fuel leakage exposing the vehicle to risk of power loss and fire while moving.

The XC90 vehicles subjected to recall are four vehicles produced between Jan. 29, 2010 and Aug. 16, 2010. The vehicles were found to have faults in the power steering system that could result in loss of steering control, the ministry said.

In April, the Construction-Transportation Ministry ordered the recall of some types of Volvo automobiles.

The ministry announced that it had discovered faulty bolts in the rear seat safety belts of 2001 S80 and V70 models. Officials said that the problems could result in injuries to passengers in the case of a collision.

Last year, 1,535 vehicles of Volvo were recalled. The automaker topped the list in the number of recalls in Korea in 2009 with 3,284 units.

“Two Sweden-born brands ― Volvo and Saab ― had gained popularity among consumers putting priority on safety than on design,” a local auto dealer said.

After they were taken over by Ford Motor and General Motors, respectively, their reputation as “safe-to-drive” cars has been undermined over the past decade, he said.

“In case of Volvo, it seems that uncertainties are growing further ― at least in Korea ― amid the situation that Volvo is under Chinese ownership,” he said.

Following Volvo, a Chinese company is reportedly moving to take over a majority stake in debt-ridden Saab, which was handed over to a Dutch company from GM in 2010.

The Chinese company agreed to take over Volvo Cars from Ford Motor for $1.8 billion in March 2010 and completed the deal during the third quarter of last year.

Volvo Cars Korea has been active in launching new models in the local market this year.