Will boy band idol-and-actor Choi Si-won score a ratings success this time around?

After starring in two not-so-successful dramas, he is taking a third stab with a series that has been mired in controversy.

Then, delays in production led Eric to abandon ship and rumors abounded that “Poseidon” was sinking.

Fortunately, a new cast was unveiled months later, with Super Junior member Choi Si-won on board and U-Know no longer in the lead but nevertheless slated to make a cameo appearance.

After playing the lead in the less-than-successful SBS rom-com “Oh! My Lady,” actor Choi took a supporting role in the “IRIS” spin-off, SBS’ “ATHENA: Goddess of War.”

Despite a star-studded cast, including veteran actors Cha Seung-won and Jung Woo-sung, the action blockbuster failed to maintain high ratings during its 20-episode run. 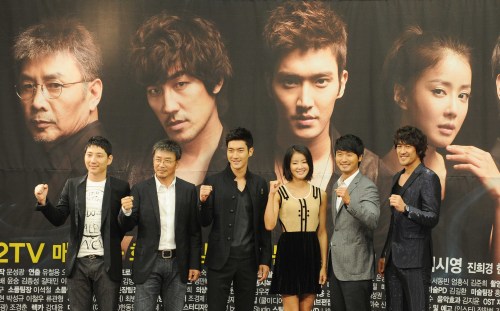 Despite the delays and change in cast, Choi stayed optimistic during the drama’s press conference in Seoul on Thursday.

“I think ‘Poseidon’ represents a very new challenge for me,” he said.

New, perhaps, in the sense that the setting is the ocean, but the premise, itself, reads more like a standard suspense piece with the mastermind behind a crime organization as the villain and the Coast Guard’s investigative division as the good guys.

“Public Enemy” actor Lee Sung-jae plays the division’s chief, while Choi plays Coast Guard sergeant Kim Seon-woo, who, after losing his partner while investigating the crime organization’s head, returns to the guard to finish what he started.

Actress Lee Si-young, who made waves after winning an amateur boxing competition, takes on a role that suits her newfound athletic persona as a tough tomboy-type Coast Guard sergeant.

Despite her prowess in the boxing ring, Lee admitted that she was “scared of the water” and before filming made the effort to learn how to swim. The actress also expressed her determination not to be upstaged by Choi in an upcoming action scene that they will be filming together.

Blockbuster veteran Yoo Chul-yong ― who directed “Swallow the Sun” and “All In”― is tackling yet another testosterone-loaded work with “Poseidon.“

“‘Poseidon’ will center around the wild episodes of the investigative team,” said Yoo.

Yoo promised to infuse the series with a love story and humanism in spades, while also bringing out all the quirks and characteristics of the characters.