South Korea’s Ministry for Foreign Affairs and Trade, which came under fire earlier this year for making hundreds of translation errors in overseas trade deals, is again being criticized for its officials’ suspected lack of ability to communicate in English.

According to a ministry document obtained by a ruling party lawmaker, four in every 10 diplomats cannot communicate properly in English or draw up a decent diplomatic document in English.

More than 600 out of some 1,500 diplomats were rated level four or below in an annual English examination conducted by the ministry, which meant they “make frequent grammatical, vocabulary mistakes” that “block a person from properly understanding” their document or dialogue, Rep. Gu Sang-chan said, citing the document. 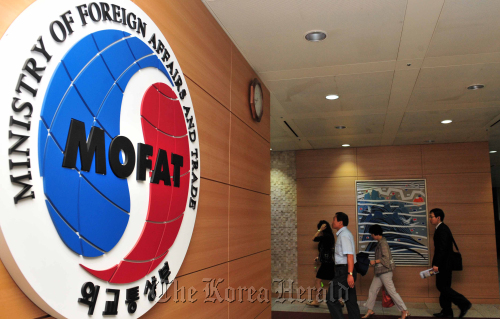 The Ministry of Foreign Affairs and Trade. (The Korea Herald)
Only 26 officials were considered “fluent in English” while some 430 diplomats had never taken the test, the legislator claimed, calling for “comprehensive measures to build up competence of diplomats overseas.”

Since 2004, the Foreign Ministry has been conducting an annual English language ability test on its officials.

The Foreign Ministry claims the document had been wrongly analyzed by the lawmaker, explaining level four on its test is equivalent to the top level on the Test of English Proficiency developed by Seoul National University, or TEPS.

“People who score level 1 on TEPS are considered to be on the near-native level of communicative competence,” the ministry said in a statement, adding nearly 90 percent of its officials belonged to this group.

An average Foreign Ministry official would score 705 out of 900 on TEPS, much higher than the 596 scored among average people, the ministry added.

Those who did not take the English test were exempted due to their position in the ministry ― which does not require any use of English ― or their specialty in other languages such as Japanese, Chinese, French, Spanish and Russian, it said.

“We have been and will continue to make effort in improving the English communication skills of our officials,” a ministry official said, declining to be named.