The unveiling of the long-awaited third installment to MBC’s wildly popular “High Kick” sitcom series did not disappoint.

True to form, the brief preview reel at the drama’s press conference Thursday unleashed a wild stampede of one slapstick-funny take after another.

Veteran actor Ahn Nae-sang took the reins as a father-and-husband whose business falls apart, forcing him and his kids and wife to jump ship, with loan sharks nipping at their heels.

While the whole cast ― 15 actors and actresses ― did not make it into the highlight reel, Ahn said no one gets to bask in the spotlight. Apparently, this is an equal opportunity sitcom. 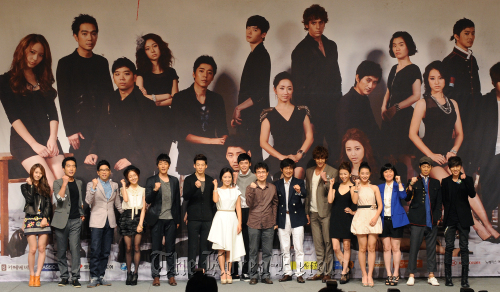 Director Kim Byung-wook (center) and the 15-member cast of MBC’s “High Kick 3” attend the drama’s press conference at the Imperial Palace Hotel in Seoul on Thursday. (Lee Sang-sub/The Korea Herald)
Just how that will happen will prove interesting as the mere act of having each member introduce themselves took up nearly 15 minutes of the press event.

Even though Ahn assured reporters there were no standout leads, cameras flashed blindingly when f(x) girl group hottie Krystal and “The Greatest Love” hunk Yoon Kye-sang stepped onstage for their respective close-ups.

While the cameras focused on Krystal and Yoon, the press directed most of their questions at the linchpin for all three seasons of “High Kick,” director Kim Byung-wook.

Surprisingly shy, almost hidden behind a set of scholarly-looking spectacles and a shadow of a goatee, Kim kept his answers frank and at times painfully convoluted, though without a hint of irony or evasion.

Almost everyone wanted to know how he and his team would be recreating the magic spun by the last two seasons, how they would keep drawing throngs of viewers to their sets every weekday night for the latest 30-minute installment into the lives of the hopefully quirky, bizarre yet endearing characters that might once again spring from the pens and cameras of Kim and crew.

“‘High Kick 3’ is incredibly dynamic in the beginning and will kind of orbit around ruckus happenings,” Kim promised an eye-catching start.

Concern over whether or not he will be able to keep the laughs coming seemed to peek through in a question regarding the lack of elderly and child characters in “High Kick 3,” especially since such characters played a key role in making the second season funny.

“I’ve done plenty of elderly-and-kid comedies before,” the director explained why his new sitcom only spans middle-aged to teenaged characters. “It is pretty easy to get a laugh out of audiences with that set-up, but there might be some overlap so I took those age groups out this time around.”

“Of course there are restrictions to producing a comedy centered on characters in similar age groups, so I have had to relinquish some of the comedy.”

As for pressure, Kim admitted that he felt overwhelmed by expectations to outperform his past successes.

“But, how about looking at it this way?” He suggested. “How about you just think of it as a simple sitcom that you can tune into at 7:45 p.m. over dinner?”

“Well that’s how it is being produced, so please don’t expect too much,” he begged.

So what can we expect?

First off, this will be a somewhat hopeful tale of underdogs, promised Kim.

Some of the quirks of the actual cast have been inserted into the sitcom ― for instance, SuperstarK 2 contestant-turned-thespian Kang Seung-yoon revealed that his character is similar to how he is in real life ― which should add to the believability of the series.

Narration will be part-and-parcel of the package, as Kim thinks it gives an objective outlook to the story and will help infuse some black comedy into “High Kick 3.”

There are also some similarities to the previous installment of “High Kick.”

With critics itching to draw comparisons, the transformative powers of using new actors and actresses might by why the only original cast member from last season is Canadian import Julien Kang, who is returning as a hansik-loving teacher to a project that Kim believes stands “independent” from previous seasons.