Starting Aug 26, the automaker carried out a challenge driving of the sedan for 12,710 kilometers for 16 days across 48 states.

“The figure surpassed the target for a world record ― 22.2 kilometers per liter ― suggested by Guinness,” Kia said in a statement. 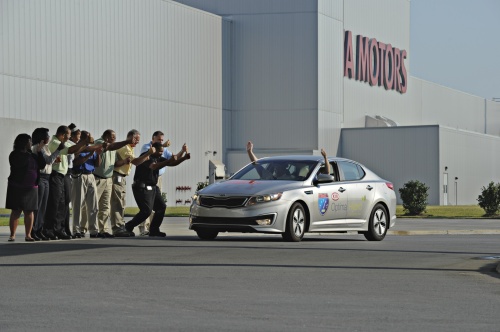 Kia’s Optima hybrid, the K5 hybrid in South Korea, arrives at the Georgia plant in the U.S. on Monday after setting a new Guinness World Record for the best mileage car by driving across the country. (Kia Motors)
The carmaker is posting a rapid growth in sales of hybrid sedans at home, following outstanding performances in the U.S. market.

In July, about 15 percent of customers of Kia and its affiliate Hyundai Motor who purchased the companies’ K5 or Sonata and K5 picked the hybrid version of the sedans.

Hyundai-Kia officials say more and more consumers are expressing their interest in the higher fuel efficiency and engine power of the hybrid models.

“We will be able to attain our initial goal of selling 11,000 Sonata hybrids and 6,000 K5 hybrids this year,” a company spokesman said.

Though the average price tag of the hybrids is higher by about 3 million won ($2,850) than that of ordinary gasoline models, consumers benefit from fuel efficiency of 21 kilometers per liter.

“This could make up for the higher purchasing cost of 3 million won if customers drive about 20,000 kilometers for the first five years,” he said.

According to Hyundai-Kia Group, the lithium ion polymer battery pack used in the Sonata and K5 hybrids has 63 percent higher power density and 13 percent higher energy density than nickel-hydrogen batteries used in other hybrid cars available on the market.