[ The Korea Herald – Send E-mail ]
‘Integration of supply chain key to meat exports’
By
Published : Sep 6, 2011 - 19:30
Updated : Sep 6, 2011 - 19:30
HORSENS, Denmark ― For struggling local red meat producers in the post-Korea-EU FTA market, the surest way to seek advice was to go to Danish Crown, Europe’s top pork exporter that continues to expand despite one of the world’s highest production costs.

At the Danish livestock farmer co-op’s slaughterhouse in Horsens, 200 kilometers east of Copenhagen, 100,000 pigs are killed and processed per week with just 110 workers handling the process from primary cutting to packaging to marketing. The integrated supply chain model secures a stable income stream and allows livestock farmers to concentrate on the study of breeding technologies. The cooperative’s 9,850 member growers are primarily responsible for a safe and abundant supply of pigs and cattle, but they are free from all meat processing and marketing efforts.

“The economy of scale we achieved by taking over major slaughterhouses in Denmark cuts production cost and raises efficiency. Much of our meat processing is automated and this saves labor costs,” Karl Christian Moller, chief analyst at Danish Crown said. 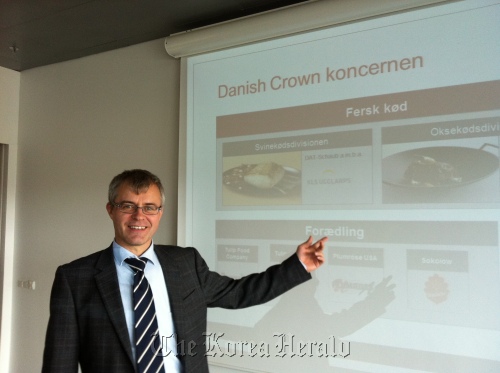 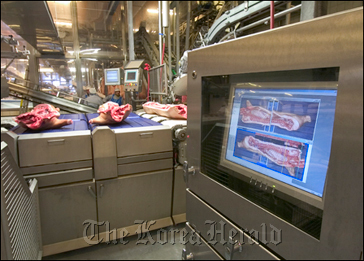 Machines analyze pork type and quality at the Danish Crown slaughterhouse in Horsens, Denmark.
Pigs delivered to the slaughterhouse first have two hours to de-stress. There are then 14 automated meat processing steps traced from start to finish by microchiping each animal. They include laser scanning of individual animals to analyze the quality of meat ― information used to grade and auto-sort them for the made-to-order product line.

Such a state-of-the-art automated slaughtering and cutting process is a specialty of Danish Crown it gained after merging companies with different business expertise in the industry’s supply chain. The largest agricultural cooperative in Denmark owns a think tank named Knowledge Center for Farming, which offers consulting services for member growers on how to breed pigs better and strategic planning of farms. Since it was founded in 1970, it has merged with every major slaughterhouse in Denmark and now exports 85 percent of Danish pork to more than 61 countries. The merging process left the industry with only two slaughterhouses ― Danish Crown and Tican, its smaller rival ― by 2004, down from 60 in 1970.

“Technologies applied in breeding can be distinguished from other countries. Danish pigs consistently reproduce litters of 28 piglets, and this is a secret exclusive to Danish research houses which allows us to beat emerging market competitors bearing less labor and energy costs,” he said.

Korean pigs reproduce litters of 12 to 13 piglets on an average.

The number of member farmers has been declining over the years, but the company points to the increased revenue at each of the farmers.

“It is true our cooperative has been losing farmers, but it’s mostly because farmers themselves were merging to achieve economy of scale. It makes running of farms more efficient,” Moller said.

Karen Hamann, a researcher at the Institute for Food Studies and Agro-industrial Development, say integration is vital to achieve economy of scale and expertise needed to meet quality, supply channel and made-to-order style of processed meat demanded by customers.

“Danish red meat is competitive in the global market because it has invested a lot in breeding technologies.” he said.