Koreans saw the growth rate of their purchasing power fall to a two-year low during the second quarter of 2011, though the index inched up.

The Bank of Korea said Tuesday that the gross national income inched up 0.6 percent to 252.1 trillion won ($233.4 billion) in the second quarter on a year-on-year basis.

This was the lowest since the growth rate of the indicator for national purchasing power posted zero in the second quarter of 2009. 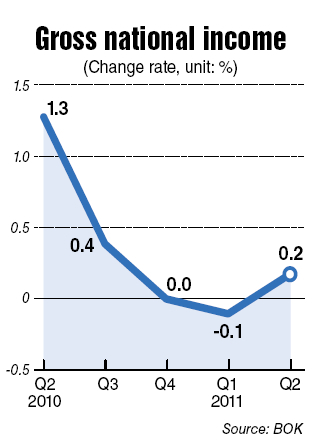 And the pace slowed to stay at 1.8 percent in the first quarter of 2011, central bank data showed.

BOK officials attributed the slack pace of GNI growth to unfavorable conditions for exports and imports over the past few months.

“Prices of crude oil and import goods have climbed while prices of export goods including semiconductors have dropped,” an official told a news briefing.

The real trade deficit from the worsening trade terms came to 17.6 trillion won in the second quarter, higher than 15.1 trillion won posted in the first quarter.

But the official added that there are not many negative factors to lower the growth estimate for the third and fourth quarters.

The BOK had projected that the growth would reach about 1.5 percent in the third and fourth quarter.

As long as the trend of high raw material prices continues, the nation’s real purchasing power will continue to deteriorate despite GDP growth, economists say.

An economist at the Korea Institute of Finance cited high consumer prices as another factor weakening purchasing power. “Since the fourth quarter of last year, real income of households has been reduced amid rising inflationary pressure,” he said.

Exports gained 0.9 percent on-quarter in the second quarter, down from an earlier projection of a 1.5 percent expansion.

Private spending, one of the main growth engines of the Korean economy, rose 0.9 percent, compared with a previous estimate of a 1 percent advance.