For some, the blessed event is followed by high-tech surveillance, a monitoring system that tracks the baby’s breathing rhythms and relays infrared images from the nursery. The next investment might be a nanny cam, to keep watch on the child’s hired caregivers. Toddlers and grade schoolers can be equipped with GPS devices enabling a parent to know their location should something go awry.

To cope with the uncertainties of the teen years, some parents acquire spyware to monitor their children’s online and cell phone activity. Others resort to home drug-testing kits.

Added together, there’s a diverse, multibillion-dollar industry seeking to capitalize on parents’ worst fears about their children, fears aggravated by occasional high-profile abductions and the dangers lurking in cyberspace. One mistake can put a child at risk or go viral online, quickly ruining a reputation.

“There’s a new set of challenges for parents, and all sorts of new tools that can help them do their job,” said David Walsh, a child psychologist in Minneapolis. “On the other hand, we have very powerful industries that create these products and want to sell as many as possible, so they try to convince parents they need them.” 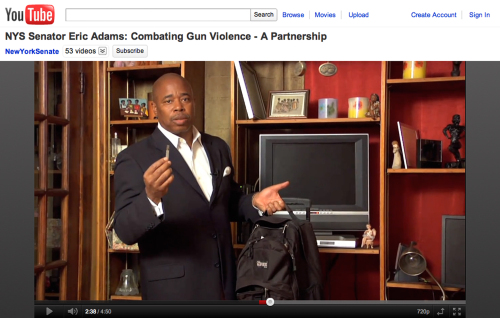 In this image made from video posted on YouTube on Nov 15, 2010, New York State Sen. Eric Adams gives parents tips on how to search their children’s bedrooms for drugs and weapons. (AP-Yonhap News)
Some parents need little convincing.

In New York City, a policeman-turned-politician recorded a video earlier this year offering tips to parents about how to search their children’s bedrooms and possessions for drugs and weapons. In the video, State Sen. Eric Adams, who has a teenage son, insists that children have no constitutional right to privacy at home and shows how contraband could be hidden in backpacks, jewelry boxes, even under a doll’s dress.

“You have a duty and obligation to protect the members of your household,” he says.

Another parent who preaches proactive vigilance is Mary Kozakiewicz of Pittsburgh, Pennsylvania, whose daughter, Alicia, was abducted as a 13-year-old in 2002 by a man she met online. He chained, beat and raped her before she was rescued four days later.

In recent years, both mother and daughter have campaigned to raise awareness of Internet-related dangers.

Mary Kozakiewicz urges parents to monitor children’s computer and cell phone use, and says those who balk out of respect for privacy are being naive.

“It’s not about privacy ― it’s about keeping them safe,” she said,

On a different part of the spectrum are parents such as Lenore Skenazy, a mother of two teens in New York City who wrote a book called “Free Range Kids: How To Raise Safe, Self-Reliant Children (Without Going Nuts with Worry).”

Skenazy, who let one of her sons ride the New York subway alone when he was 9, contends that many marketers exploit parents’ ingrained worries about their children’s safety.

“The idea is that the only good parent is a parent who is somehow watching over their child 24/7,” she said. “You feel nothing should take precedence over monitoring your child’s well-being every second of the day ... from the time they’re born to when they go off to college.”

‘‘Markets play on this fear that something horrific is going to happen to your child, when the odds of that are minuscule,’’ he said. ‘‘It might happen, but to have their whole childhood predicated on this remote possibility is, in the aggregate, even more damaging.’’

Psychologists who work with troubled adolescents and teens say parents often ask if they should be doing more surveillance.

“Ideally, parents establish good open communication and trust with their children, and they don’t need to do all these things,” said Neil Bernstein, a psychologist in Washington, D.C. “But if the child is doing something to create suspicion, you can’t expect parents to turn their back and not monitor.”

Bernstein, author of “How to Keep Your Teenager Out of Trouble and What to do if You Can’t,” says the best approach is a balanced one ― neither overly zealous and paranoid nor uninvolved and neglectful.

A look at some of the monitoring tactics and products available to parents:

These devices, some limited to audio monitoring, others also with video capability, have developed a reputation as a mixed blessing. They can provide parents with peace of mind, freeing them to be elsewhere in the house while the baby naps, but sometimes they accentuate anxiety.

The monitors operate within a selected radio frequency band to send sound from a baby’s room to a receiver in another room, a technology which can be vulnerable to interference from other electronic devices. Prices of models tested by Consumer Reports ranged from $30 for audio monitors to more than $200 for some with video.

Experts say baby monitors can provide a useful early warning if something is amiss, but caution that they should never substitute for adult supervision.

Parents are warned not to rely on monitors to prevent Sudden Infant Death Syndrome, and they should be sure that the monitors’ electrical cords are kept away from cribs. Earlier this year, about 1.7 million Summer Infant video monitors were recalled after being linked to the strangulation deaths of two infants.

Of the roughly 800,000 children reported missing in the U.S. each year, the vast majority are runaways or were abducted by a parent. But there are enough kidnappings by strangers, including a few each year that make national news, to fuel a large, evolving market for products catering to apprehensive parents.

The devices range from clip-on alarms to GPS locators that can be put in a backpack or stuffed in a doll, but they have limited range and can raise safety concerns of their own.

Ernie Allen, president of the National Center for Missing and Exploited Children, says the devices can be helpful in some circumstances but worries about overreliance on them.

“Some of them encourage parents, perhaps unwittingly, to forget their basic responsibilities,” he said. “There are parents who think they can depend on the technology, not on themselves.”

Generally, the gadgets are in two parts ― a main device carried by the parent and a small alarm attached to the child. If a child vanishes, the parent can activate the alarm.

Other gadgets use GPS technology, relying on satellite signals, that allows parents using a Web browser to track the location of an enabled device such as a cell phone.

For many parents, one of the toughest decisions is whether to spy on a child’s computer and cell phone activity. It is common for some children to send more than 100 text messages a day, and a recent Associated Press-MTV poll found that about one-quarter of teens had shared sexually explicit photos, videos and chat by cell phone or online.

Walsh, the Minneapolis psychologist, says the best initial step for parents concerned about online risks is a heart-to-heart talk with the child, with monitoring used as a contingency measure only if there is clear justification.

“If it does make sense to use some spyware, I would never do that in a secret way,” said Walsh, whose own three children are now adults. “Tell your children you’ll check on them from time to time. Just that knowledge can be effective.”

“You can’t let them know it’s there, or they’ll do it at a friend’s house,” she said.

Several spyware brands, including Mobile Spy and MobiStealth, now offer systems that work with Android, Google’s operating system for mobile phones, ranging in price from $100 to $150 per year.

The software “gives you complete control over your child’s cell phone,” says MobiStealth.

Dr. Henry Gault, who practices child and adolescent psychiatry in Deerfield, Illinois, says parents who spy on their children “are walking down a slippery slope” and may end up causing worse problems than the ones that prompted the surveillance.