According to the Korea Consumer Agency, BMW Korea saw its sales come to 17,072 units for the first seven months of the year, up more than 80 percent from the same period in 2010.

Meanwhile, the number of customer complaint cases filed with the local consumer protection center surged 100 percent from 99 to 198 on a year-on-year basis. 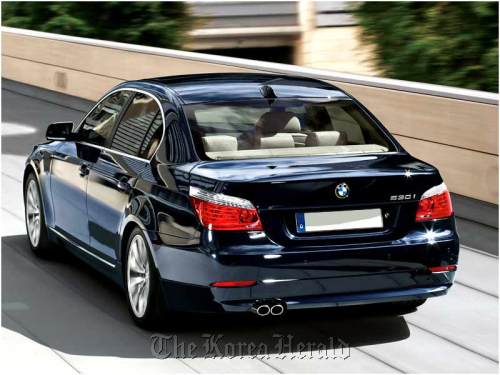 A BMW 5 series model
Over the past few years, those buying BMW vehicles cited a variety of reasons for their complaints, including frequent breakdowns and high repair costs.

The consumer agency has said the most common complaints against foreign cars were about structural defects that resulted in sudden engine shutdowns, noises and vibrations.

Trunk space and fuel efficiency were also among the items listed by industry sources as unsatisfactory.

“As Korean drivers have higher expectations for foreign vehicles than local products, they could be more dissatisfied once they find something they don’t like after taking their vehicle out for a spin,” a local automobile dealer said.

According to the Ministry of Land, Transport and Maritime Affairs, BMW has problems in the electrical system that supplies power to the motor inside the fuel pump.

The problem, which was uncovered late last year, could affect the ignition mechanism, making it hard to start the car, or cause the vehicle to lose power while it is on the road, a ministry official said.

In petitions to the land ministry, a group of consumers have continued to demand the company recall part of its vehicles for alleged defects in its digital screens on the gauge board of some BMW vehicles.

The automaker had also been slapped with antitrust fines totaling 14 billion won ($13 million) for unfair sales practices in Korea.

According to the Fair Trade Commission, seven BMW dealers had drawn up an agreement to set limits on discounts, areas of operation for each dealer and other conditions to avoid price competition.

Other conditions in the agreement include banning dealers from offering gift vouchers with the cars and providing sales personnel with incentives.

As a result, the average discount rate the dealers provided fell 3.7 percentage points compared to the rates provided before the agreement, the FTC said.

The regulator said the dealers also held monthly meetings to make alterations to the agreement and employed mystery shoppers to ensure that the dealers were following the rules, the watchdog said.

While the Korean government said BMW Korea’s recall in 2010 was voluntary after the manufacturer discovered the fault, the German carmaker also issued recalls involving about 150,000 luxury vehicles in the United States in late 2010.

The recall was aimed at fixing faulty fuel pumps that could cause vehicles to lose power.

The company notified the U.S. Environmental Protection Agency that it would recall 130,000 vehicles from the 2007-2010 model years over emissions.

According to BMW officials, the high-pressure fuel pump could fail on the vehicles and owners could experience long-crank engine starting times or reduced engine performance.

The U.S. government’s auto safety agency opened an investigation in April 2008 into possible fuel pump failures on 2007 BMW 335i sedans.

North American consumers complained that it took longer than usual to start the engine, or rough engine running.

In addition, there has been speculation that major import brands such as BMW and Mercedes-Benz have abused their dominant position in Korea to keep prices of their automobiles higher than those in other countries.

Local automobile importers have long been criticized for profiteering through high prices.

Several importers had allegedly sold luxury sedans in Korea more than twice the price of the same model in the U.S.

In July, BMW topped the list among foreign carmakers with a sales record of 2,274 units, followed by Mercedes-Benz with 1,522 units, Volkswagen with 1,106 units and Audi with 941 units.