He is back. Usain Bolt, the fastest man on the planet, did a little dance on Saturday before showing his trade mark “lightning pose” at the Daegu Stadium after successfully defending his 200 meters title.

The 25-year-old Jamaican crossed the line first with a new leading record of 19.40, followed by American Walter Dix in 19.70. France’s Christophe Lemaitre came third with a 19.80.

Having failed to defend his title following a false-start in the 100m final, the Jamaican sprinter was determined to make up for his disappointing early miss.

Bolt started a bit slower than other sprinters, but he emerged from the curve with a comfortable lead. And he didn’t not slow down this time until he crossed the line first. 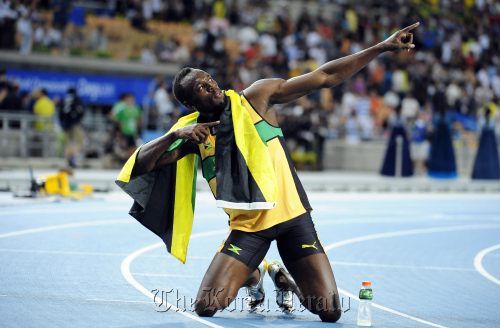 Jamaican sprinter Usain Bolt celebrates after winning the men’s 200 meters title on Saturday. Park Hae-mook / The Korea Herald
The eighth day of the championships opened with the men’s 50km race walk. Sergey Bakulin of Russia, the fastest man in the world at 50km this year, held together over the final kilometers to take the gold medal on Saturday morning with 3:41:25.

World-record holder Denis Nizhegorodov, also of Russia, was 01.21 behind for silver and Jared Tallent of Australia took bronze in 3:43:36.

In other events, the U.S. squad ran in for a season best 3 minutes, 18.09 seconds, in the women’s 4 x 400m relay to take gold leaving Jamaica and Russia settling for silver and bronze.

Confirming her dominance in the women’s 100-meters hurdle this season, Australia’s Sally Pearson leaped her way to her first world championship title.

The 24-year-old had the lead from starter gun to the finish line setting a World Championship record, and burst into tears of disbelief after crossing with 12.28 seconds. Following far behind were U.S.’s Danielle Carruthers and Olympic champion Dawn Harper.

The Kenyans now have six out of the eight gold medals in long distance events as Asbel Kiprop and Silas Kiplagat took the men’s 1,500 meters gold and silver, with another one expected on Sunday.

Olympic champion Kiprop took the lead from New Zealand’s Nicholas Willis before the 1,200 mark and defended it for a 3:35.69 finish.

Matthew Centrowitz, 21, of the U.S. followed the 22-year-old Kenyan Kiplagat at the last stretch to take bronze.

Earlier in women’s high-jump, 2007 and 2009 silver medalist Anna Chicherova of Russian finally won her first world title with a best of 2.03m. Defending champion Blanka, who cleared the 2.03m bar in her second attempt, took the silver while Italy’s Antonietta Di Martino claimed bronze with a best of 2.00m.

The 23-year old won the title with an opening throw of 86.27 meters. Thorkildsen, who won gold or silver at every Olympic and Worlds since 2004, took second with a toss of 84.78m while Cuba’s Guillermo Martinez took bronze with 84.30.