DAEGU (AP) -- With the famed ``Lightning Bolt'' celebration back to its boastful best, Usain Bolt ran two solid qualifying runs to pump himself up for Saturday's 200-meter final. 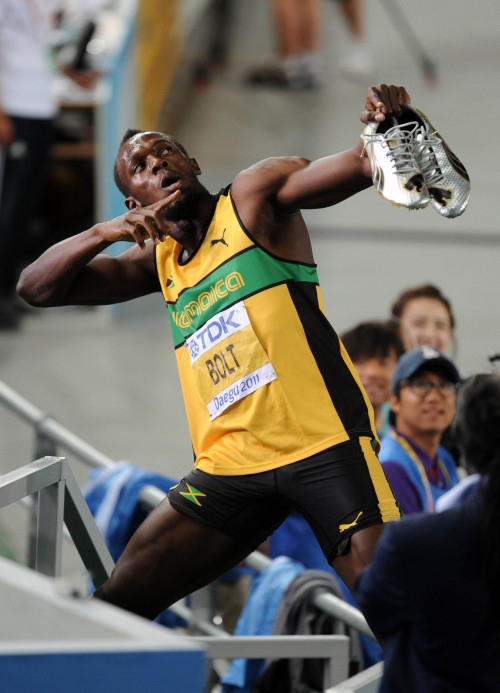 The defending champion put last Sunday's debacle of a false start in the 100 final behind him, and instead of anger and frustration at losing his grip on the sport's marquee event, he again brought out his best.

``Back to my normal self. I'm trying to enjoy the game as much as possible,'' Bolt said after two overwhelming performances in which his deliberate, slow start contrasted sharply with his show of power through the races. ``I know I'm still the best, so I'm focused on it.''

And if he needed any guidance in the 200, there was two-time Olympic champion Veronica Campbell-Brown fighting off 100 champion Carmelita Jeter and three-time defending champion Allyson Felix to clinch an important gold in the Jamaica-United States sprint rivalry.

The Americans still came out of Friday's rush of six finals with two gold. They lead the medal standings with nine gold and 16 overall.

With a bib number of 1111, American long jumper Dwight Phillips obliged, winning his fourth world title since 2003. With a leap of 8.45 meters, he beat Mitchell Watt of Australia and Ngonidzashe Makusha of Zimbabwe.

And the American 4x400 relay team won its fourth straight gold, getting an amazing final kick from LaShawn Merritt to deny South Africa and Jamaica at the line.

Even though double-amputee sprinter Oscar Pistorius was surprisingly left out of the lineup, he will still get his silver for running in the heats. Pistorius ran the leadoff leg that got his team into Friday's race with a national record.

After saying on Twitter that he was ``Pretty Guttered'' for being left off the final team, Pistorius looked on the bright side.

``Gods blessed me! Semifinals in the 400m and a National Record in the 4x400m semi!Thank u all!x,'' Pistorius wrote on Twitter.

Another South African, defending 800 champion Caster Semenya, put a troubled season behind her with a powerful last lap to become the top qualifier for Sunday's final, ahead of the year's best performer, Mariya Savinova of Russia.

A gender controversy made sure she missed last season, but Semenya came back strong in Daegu. She ran perhaps the best race of her season in 1:58.07 to make her a medal contender while many thought she would fail to make the final.

Bolt can still get a double if he wins the 200 and Jamaica also wins the sprint relay on Sunday. But Vivian Cheruiyot of Kenya already got hers by winning the 5,000 to add to her 10,000 title last Sunday.

It was the fourth 1-2 finish for Kenya as the east African country continued to dominate middle and long-distance running. Kenya was second behind the United States with five gold and 12 medals overall.

David Storl of Germany broke an American stranglehold in the shot put with a toss of 21.78 meters, beating Dylan Armstrong of Canada and Andrei Mikhnevich of Belarus. United States shot putters were shut out of the medals for the first time in two decades.

Maria Abakumova of Russia flirted with the world record in the javelin but had to settle with a championship-record throw of 71.99 meters to win the javelin. World-record holder Barbora Spotakova of the Czech Republic took silver and Sunette Viljoen of South Africa earned bronze.