Jamaica asserted dominance in the sprints with Veronica Campbell-Brown taking gold in the women’s 200 meters, as the “Curse of the Cover” struck its sixth victim on the seventh day of the championship.

Daegu’s 100m champion Carmelita Jeter and three-time defending champion Allyson Felix were featured on the sixth cover of the daily programs, but had to settle for silver and bronze, respectively, at the IAAF World Championships 2011 in Daegu on Friday. 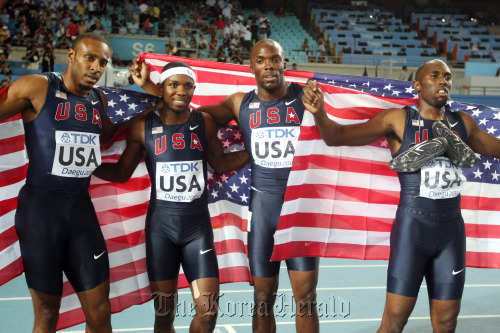 The U.S. team celebrates after winning the men’s 4x400m relay at the 2011 World Athletics Championships in Daegu on Friday. Park Hae-mook/The Korea Herald 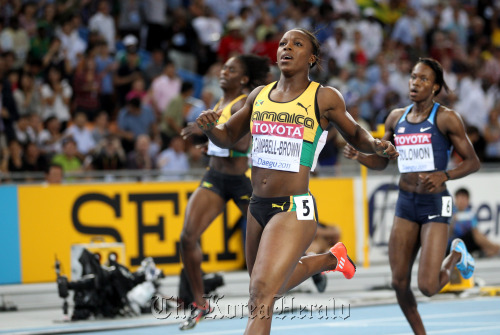 The event largely predicted to be a toss-up between the U.S. compatriots instead saw the 29-year-old Jamaican run in for her season best at 22.22 seconds.

Favored athletes featured on the cover of the Daily Programmes at the games have suffered losses this year, including Usain Bolt for a false start and 110-meter hurdler Dayron Robles for obstruction, highlighting the increasing competitiveness of the events.

Other victims include Aussie Steven Hooker and Russia’s Yelena Isinbaeva in the men’s and women’s pole vault, and Yargeris Savigne of Cuba in the women’s triple jump.

It was another dramatic finish in the men’s 4x400m relay as the U.S. team successfully retained their world title finishing in 2:59.31 after chasing down the runnersup South Africa and Jamaica in the final 400m.

The U.S. team, which has won the last nine World Championships in this event, started as an absolute favorite. But in the first leg, it was Belgium who handed the baton first.

In the second leg, South Africans held a slight lead with Jamaica and the U.S. close behind.

It was on the final leg that the Americans took the lead. LaShawn Merritt , who had disappointed earlier in the men’s 400m, finishing in close second, closed the gap in the first stretch before powering off the final bend to win the title.

The South Africans, who omitted “Blade Runner,” Oscar Pistorius in the final, finished second in a 2:59.87 and the Jamaicans won the bronze in 3:00.10.

It was Kenya that fared well in the women’s 5,000 meters adding two more medals to its count as the defending champions Vivian Cheruiyot and Sylvia Kibet took the gold and silver with 14 minutes, 55.36 seconds.

The 27-year-old Cheruiyot led the pack for the better part of 4,000 meters with compatriot Linet Masai, keeping the Ethiopian team, Meseret Defar and Sentayehu Ejigu at bay.

At the last 200 meters Cheruiyot broke off from the leading pack with Defar chasing, but at the last 100 mark Kibet mustered a sudden burst of energy to leave the bronze for Defar.

Although simply the semis, the biggest cheers by far in the stadium on Friday night came with the mention of Usain Bolt for the Men’s 200 meters.

The crowd at Daegu and the lightning Bolt seem to have a synergy of sorts, with the crowd roaring for the defending champion, and the star posing for them with theatrical flair, causing young girls to shout their love for him.

The Jamaican even threw his shoes up into the eager hands of girls in the upper tiers, causing hysteria.

Competition for the 25-year-old looks fierce as France’s Christophe Lemaitre coming first among his pack for the fastest time in the semis and U.S.’s Walter Dix cruising in first in his.

Two years ago in Berlin, then the 31-year-old Phillips was the first man to regain the men’s world long jump title.

Australia’s Mitchell Watt, who won the bronze in Berlin, claimed the silver medal this time with 8.33m in his second attempt.

Zimbabwe grabbed its first medal at the Daegu Worlds as Ngonidzashe Makusha finished third at 8.29m.

Dylan Armstrong of Canada took silver with a throw of 21.64 and Andrei Mikhnevich of Belarus was third with 21.40m.

The men’s shot put final was anticipated to be a fierce rivalry between the last World Championships winners, including 2007 winner Reese Hoffa and defending world champion Christian Cantwell, both in the final. But the most impressive man of the evening was the 21-year-old Strol.

The German produced a personal best of 21.60m in his second throw to stand at the top of the table. But Armstrong, who leads this year with a record of 22.21m, soon pounced back, throwing 21.64m in his fourth attempt.

Then, the young German produced a powerful 21.78m, breaking his record again in the final throw to win his first world title.

Defending champion Cantwell had to settle for fourth with 21.36m, leaving his long-time rival Hoffa in fifth place with 20.99m.

By Oh Kyu-wook and Robert Lee