That she’s one of stage, screen and TV’s greatest actresses is a given. If nothing else, her Oscar-winning portrayal of Queen Elizabeth in “The Queen” and her multiple Emmy Award-winning performance as tortured policewoman Jane Tennison in the “Prime Suspect” TV series speak to her astonishing versatility and range. In addition, at age 66, she’s regarded by many as one of the sexiest women on the planet.

Lewis Beale spoke with her while she was doing publicity for her latest film, “The Debt,” in which she plays a retired Mossad agent who finds out that there is some decades-old business that needs to be taken care of. 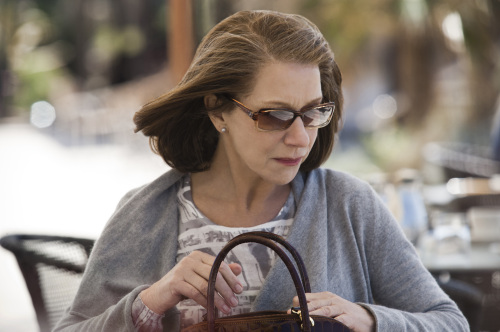 Academy Award winner Helen Mirren stars as retired secret agent Rachel Singer in John Madden’s espionage thriller, “The Debt.” (Laurie Sparham/Courtesy Focus Features/MCT)
Q. What was it about “The Debt” that interested you?

A. I thought it was a great story. We have all kinds of movies nowadays, we can see anything we want on the screen, and what gets lost a lot these days is the story. And I felt that was what this was, it’s a bit of a nail-biter, a mystery, a love story, and you get the feeling it could be true. And I loved the idea of playing a proactive role.

Q. My guess is at this stage in your career, you can pick and choose your roles. How do you do it?

A. Who’s the director? That’s important. Is it great writing? Where is it shooting? If it’s being shot in a fabulous location, that will be fun. And is it sufficiently different from the last thing I did. I did “Arthur” after I did “The Debt,” and that was one of the great pleasures, following up with a comedy.

Q. You’ve also done a lot of theater work, for which you’ve won numerous awards. How do you rate theater versus film?

A. Theater is more tiring, demanding, more frightening, everything. Film you have to get up early in the morning, and I hate that. Both are powerful mediums, but the great thing about theater is you do material you don’t normally do on film, and you’re the editor of your performance onstage.

Q. You’ve recently been shooting an HBO film about the record producer Phil Spector. What part do you play?

A. I’m playing Phil’s defense lawyer in the first trial. It’s not a literal documentary sort of piece; it’s written and directed by David Mamet, so it’s more mythological, more to do with the way human beings are. Spector is incredibly damaged, damaged by fame and fortune, as so many people are.

Q. Your birth name is Ilyena Lydia Vasilievna Mironoff. Your father was Russian, and his father was a czarist diplomat who got caught in London during the revolution and couldn’t return home. Is there anything about you that’s particularly Russian?

A. I love borscht, and do drink vodka. I have that sort of Russian peasant bottom half. There is a Russianness in my nature. I think there’s a tendency to be serious about life, to philosophize about life and take life seriously.

Q. You don’t have any children of your own ― although you have two stepsons with your husband, director Taylor Hackford ― and have said you have “no maternal instinct whatsoever.” Have you ever regretted your decision?

A. I don’t think my mother really wanted to be a mother. She did, because it’s what you did then. And I never heard from her, “When are you going to give me grandchildren?” I think she lived my freedom from family through me. But I am very family-oriented ― my husband, my stepsons, we create a very tight family nucleus, we love each other and support each other. But I never personally wanted to have children. It’s just my nature. I love children, and I’m a pathetic kind of baby lover, but I just didn’t have the desire to go that route in the past.

Q. You and your husband have been a couple since the 1980s and were married 14 years ago. How do you maintain such a long-lasting relationship?

A. It’s the old-fashioned qualities of trust and loyalty. Giving the other person the freedom to do what they’re driven to do, especially with two artists.

Q. You were recently named as having the best female body in a poll taken by L.A. Fitness, and a photo of you taken in 2008 looking fabulous in a red bikini went viral. Are you tired of people obsessing over your 60-something hotness?

A. I’m patient and humorous about it, but I’m tired of it. I don’t look like that. I was lucky in that paparazzi shot that went viral, and it’s not really how I look. It wasn’t digitally enhanced, but not really realistic. And I think honestly, if I have any vestiges of any kind of a nice body, it’s genetic. It’s ironic that L.A. Fitness picked me, because I’ve joined fitness clubs and never gone. I occasionally do the Canadian Air Force Exercise, which is 12 minutes a day, but mostly I don’t exercise. But people want to hear I’m in the gym every day.