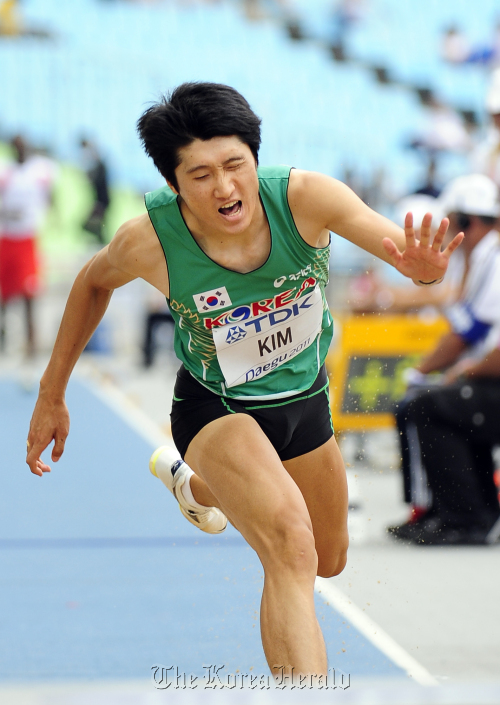 Korean hopeful Kim Deok-hyeon fails to qualify for the men’s triple jump final on Friday. Park Hae-mook/The Korea Herald
The 25-year old triple jumper, however, failed to live up to expectations after being knocked out at the qualification round on Friday.

The Asian Games medalist jumped his season best record of 16.99 meters to win the pre-championship title in May, becoming Korea’s big hope for its first ever Worlds Championships.

But on Friday, Kim failed to reach the qualification standard of 17.10m. In fact, he could not even get close to the 17-meter line after being knocked out with three fouls.

The triple jump requires speed, power, flexibility and also rhythm as the athletes use a sequence of one-legged jumps to take off.

But Kim, who was under great pressure to perform as the country’s big hope, lost his concentration on his step and failed to jump from the take-off board. And now, with Kim’s knock-out, Korea is likely to be among the few host countries to fail to win a medal at the championships.

In the men’s triple jump qualification, defending champion Phillips Idowu of Great Britain, 2009 World bronze medalist Alexis Copello and also 2008 Beijing medalist Nelson Evora of Portugal all made it to the final on Sunday.