[ The Korea Herald – Send E-mail ]
Over two decades in the world champs
By
Published : Sep 2, 2011 - 20:01
Updated : Sep 2, 2011 - 22:47
DAEGU ― Although the World Championships in Daegu has yet to produce any record-breaking performances, it has seen a new all time record ― for the athlete who has competed in an unprecedented number of championships. 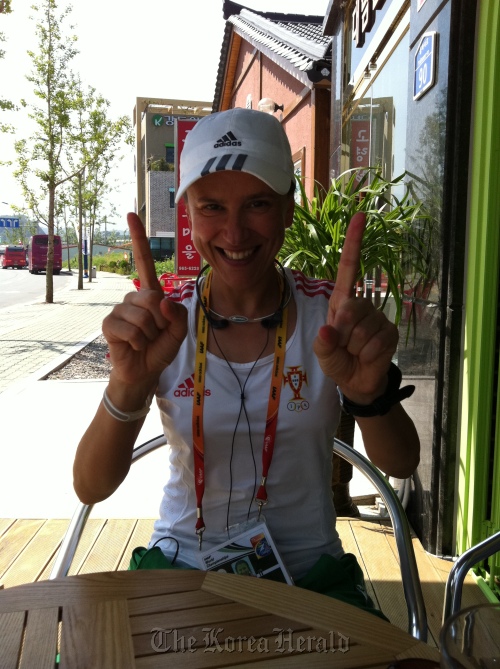 Portugal’s fastest race walker Susana Feitor is also the longest performing athlete in the history of the event, participating in 11 World Championships and five Olympic games.

In her 24 years of competing all over the world, Feitor has taken away more than just places and medals, including sixth in Wednesday’s women’s 20-kilometer race walk.

“Here in Daegu everyday you have an example of your country (through cultural programs) and I think it’s a very good opportunity for us to meet and spread the word,” Feitor, who has had little chance to leave the athletes’ village, told The Korea Herald.

She has also seen the way the world has changed to benefit the athletes.

“I could see the differences in every championships, the new technology, the way that they make the broadcasting. So many things have changed, its much easier now,” said Feitor.

“The big change for me is that you know more clearly about how to explore your limits from your body because of how sports science has improved a lot in the last few years.”

But not all things she has seen in the years have changed for the better.

For Feitor the biggest disappointment in technology was the advancements in doping.

“Doping is one of those things. It’s a very big problem,” she said.

“That’s one of the things you can see going through the years. There is lots of money involved in the results and you see that people sell themselves, sell their morality and that’s the part I don’t like in sports.”

And when you are dedicated to a single sport for so long, it is inevitable to face the lows, according to Feitor, who had moments where everything felt very bad, leading her to almost give up the sport completely.

But rather than giving up, she continued to race through, feeding off seemingly upward slopes to cruise down.

“If you are able to take advantage of it and transform that then it’s like a boost, like a big stimulation kind of thing,” said Feitor who saw her boost as a bronze in the 2005 championships in Helsinki. She had been very close to quitting after coming in 20th in the 2004 Olympic Games in Athens.

After that, Feitor decided to take her future “step by step, year by year,” and knows that she wants to go to London even though she will be 37 by then.

“Its really not the age, or the number. It’s kind of more like every year we need to train,” said Feitor adding that she will continue to be involved in the sport, but is not yet sure if there will be a 12th World Championships.