The bad news: Domestically, revenues rose only a fraction compared to the previous year’s, while actual movie attendance dropped for the fourth-straight year.

Taken together, the summers of 2010 and 2011 combined form the smallest domestic audiences since the summers of 1997-98. Since peaking at a modern high of 653 million tickets sold in summer 2002, domestic attendance has wavered generally downward, dipping to 551 million in summer 2010 and sliding again this summer to 543 million, according to projections from box-office tracker Hollywood.com. 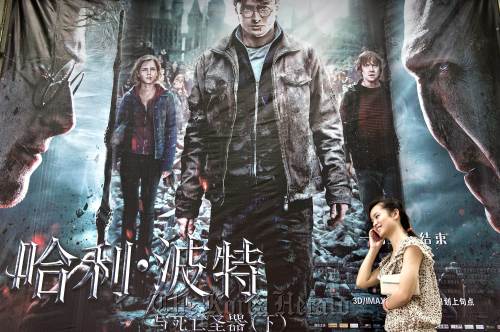 A woman walks past a billboard advertising ‘Harry Potter and the Deathly Hallows ― Part 2’ in Shanghai. (AFP-Yonhap News)
One so-so summer can be an aberration, when the movies simply failed to grab fans. Two so-so summers in a row are a sign of the tough task studios face to keep butts in theater seats at a time when audiences have more entertainment options than ever.

“One down summer you could lay at the doorstep of a lack of quality films, audience indifference, whatever. But more than one or two years becomes a trend, and we’re seeing this downward trend in attendance,” said Hollywood.com analyst Paul Dergarabedian. “Emerging technology combined with an audience that is trying to figure out how they want to consume their entertainment is creating this situation.”

Many in Hollywood expected summer 2011 to be a knock-it-out-of-the-park season. The summer was jammed with superhero sagas, huge animated sequels and action franchises that studio executives predicted would quickly lift the industry out of a deep rut after the year began with a weak run of movies.

Summer did erase most of this year’s deficit on revenues, which back in spring had been running as much as 20 percent behind last year’s.

According to Hollywood.com, domestic receipts from the first weekend in May through Labor Day weekend should finish at a record $4.38 billion, up 0.7 percent from summer 2010. But factoring in this year’s higher ticket prices, actual attendance will be down 1.4 percent.

Studio executives get defensive comparing this year to last, saying the early part of 2010 made for an unfair contrast because blockbusters such as “Avatar” and “Alice in Wonderland” were keeping theaters jammed. By comparison, the early months of this year were a quiet time at theaters, digging a hole for a business that’s always looking for the next box-office record.

“The challenge the whole industry found itself in was a testament to the films in the market last year,” said Dave Hollis, head of distribution at Disney. “It creates a story that is frankly less about 2011 than it is about the amazingness of 2010.”

For the year, revenues now are running 4.3 percent behind 2010’s, a big recovery since spring. But it’s not as good as projected in May, when some Hollywood executives were predicting that this year’s revenues would shoot past last year’s by early summer.

Still, some of this summer’s films delivered spectacularly, including $300 million megahits “Harry Potter and the Deathly Hallows: Part 2” and “Transformers: Dark of the Moon.” And while most franchise films packed in big crowds, they often did not live up to the domestic returns of their predecessors, among them “Cars 2,” “Pirates of the Caribbean: On Stranger Tides,” “The Hangover Part II,” “Kung Fu Panda 2” and “X-Men: First Class.”