Some people may have thought that “The Musical” ― a song-and-dance made-for-TV miniseries ― would never see the light of day.

The drama waited in the wings with the press second-guessing its fate every step of the way. 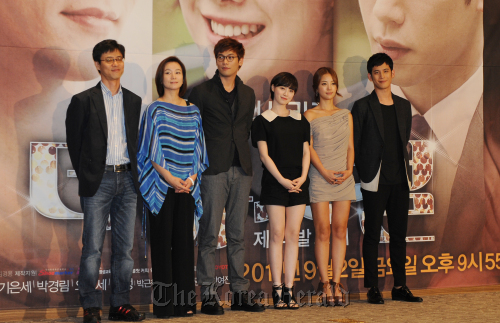 “You know, I guess you could say it’s actually kind of sad to be watching a drama on a Friday night,” said actor Choi Daniel, unabashedly forthright at the series’ press conference Tuesday.

“But I hope this drama will be a source of comfort to viewers.”

Choi did not attempt to sugarcoat the situation, saying that “The Musical” was “a very, very long time in coming” and that “we kept filming on and off and on and off.”

“Last year, we started filming in May and June then we stopped because of certain difficulties,” co-star Ku Hye-sun, whom many remember as the heroine of “Boys Over Flowers,” explained.

“Then we started filming again and then we stopped again so I went onto film a drama in Taiwan and Daniel went on to do ‘Baby-faced Beauty.’

“To be quite frank, it isn’t that great to have all those stops in between,” Ku added.

The absence of musical actress-diva Ok Ju-hyeon, who is starring in the drama, at the press conference did little to alleviate the gloom-and-doom vibe overshadowing the series.

It is too early, however, to write off “The Musical” as a failure.

Though Friday night is generally seen as a time to go out and party, it looks like there are plenty of people who like to stay home and turn on the tube instead.

In other words, a Friday night time slot does not necessarily spell a ratings disaster.

Instead, it looks like the greatest hurdle “The Musical” faces is in selling its subject matter.

To date, music-heavy series have been ringing in volatile ratings.

Both SBS’ “He’s Beautiful!” and “I’m Legend,” two series that centered on bands, failed to bring in high viewer numbers when they aired.

“The Musical” actress Ku, however, seemed unperturbed by it all, displaying a positive attitude toward her role as an aspiring musical actress opposite Choi Daniel’s genius composer.

“Now that I am 28, I want to instill hope in viewers through my projects,” she said. “Rather than feel the need to focus on evolving as a thespian, I want to make people feel happy when they watch me onscreen and the first work I encountered when I started to take on this mindset was ‘The Musical.’”