President Lee Myung-bak appears to have expressed willingness to soften his hard-line stance toward North Korea by appointing a moderate diplomat as his next point man on Pyongyang, officials and analysts said Wednesday.

The South Korean presidential office unveiled a small scale Cabinet shakeup on Tuesday, which included the replacement of Hyun In-taek with Yu Woo-ik as head of the Unification Ministry.

Considered a symbol of Seoul’s hard-line policy on North Korea, Hyun had preserved his seat for over two years during which the two Koreas exchanged fire near their western sea border, and confronted each other over propaganda activities, cross-border tours, nuclear disarmament talks, aid and more. 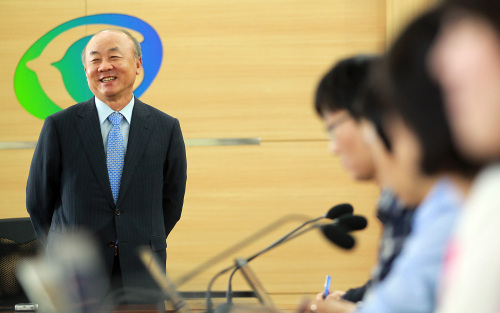 Yu Woo-ik, President Lee Myung-bak’s Unification Minister nominee, talks to reporters at a government office in Seoul on Wednesday. (Yonhap News)
The two Koreas, who are technically still at war as their 1950-53 conflict ended in a truce rather than a permanent peace treaty, have been increasing efefforts to ease months-long tension and mend ties.

Yu, 61, served as Lee’s chief of staff and is believed to have maintained a dialogue channel with North Korea as a former ambassador to China, Pyongyang’s last-remaining ally.

“I plan to mull whether there’s room for flexibility (in North Korean policies),” the minister nominee said during a brief press conference Wednesday.

The government’s stance on Pyongyang should be “consistent,” Yu said, adding he will make utmost efforts in creating an atmosphere conducive to peaceful reunification with North Korea.

Often dubbed President Lee’s “right-brain,” Yu is regarded as a negotiator with a flexible stance toward North Korea and is expected to work on thawing the long-icy relations with Pyongyang through dialogue.

The nomination of Yu comes as regional powers have been moving to resume the six-nation denuclearization talks which have been stalled since the end of 2008.

Improved relations between the Koreas will play a key role in propelling the process, analysts have been saying, as Seoul continues to hold hard feelings against Pyongyang for its two deadly attacks last year. Their ties have stayed poor since last November, when North Korea bombarded a northwestern South Korean border island just eight months after sinking a Seoul warship with a torpedo. The two attacks killed 50 South Koreans.

“This appears to me as a message of reconciliation to North Korea,” Yang Moo-jin, a North Korea expert at South Korea’s University of North Korean Studies, said.

In replacing the hard-line minister, Lee signaled that he would not make a drastic change in his stance toward Pyongyang by seating Hyun as his special advisor for unification affairs.

Yu will officially take office once confirmed by the legislature in a hearing seen largely as a formality.

North Korea has frequently urged South Korea to dismiss Hyun, denouncing him as “despicable human scum” and a “traitor” over his tough stance.

The Lee government had refused to replace Hyun for more than two years, claiming his departure may give Pyongyang “the wrong idea” about Seoul’s stance.

As one of Lee’s closest confidants, the minister nominee may also play a role in expanding the influence of the Unification Ministry, which had often taken a backseat behind the Foreign Ministry, according to political insiders.

The appointment of Yu also is expected to lessen the political burden on the conservative ruling party over ongoing tensions with North Korea ahead of the parliamentary and presidential elections next year.

“Yu appears likely to make effort in creating a better mood between the two Koreas (ahead of the elections),” Prof. Yang said.

Also noting such need, chief of the ruling Grand National Party had told a local forum Tuesday that his party must ease its hard-line policy so as not to “burden the people” and fend off the accusation of being “against reunifying with North Korea.”

Yu is expected to start from lighter issues ― such as a fresh round of reunions of families separated by the Korean War and humanitarian aid to the North ― to create a mood of dialogue and reconciliation with Pyongyang.

The two Koreas have been making slow but clear efforts to thaw the ice since their chief nuclear envoys met on the sidelines of a regional security forum last month.

An issue with relatively lighter political weight, such as new round of reunions or resumption of food aid on the government-basis, may help the two sides further mend ties.