[ The Korea Herald – Send E-mail ]
Korean film content needs global perspective: visual effects expert
By
Published : Aug 30, 2011 - 18:41
Updated : Aug 30, 2011 - 18:41
The Korean film industry’s production capabilities are extraordinary, but it is unfortunate that the content is still being made for Korean people, an American visual effects expert said at a forum Tuesday.

Scott Ross, co-chairman of inDSP USA, a company specializing in converting 2-D motion pictures to 3-D, said content business is the future of all economies, including Korea. 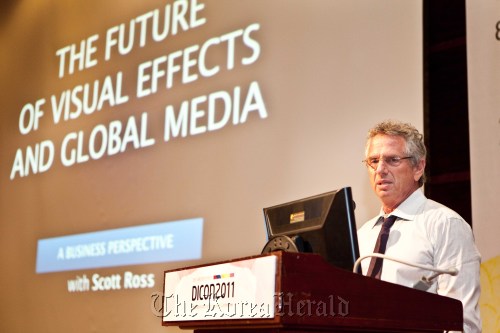 Scott Ross, co-chairman of inDSP USA, delivers his keynote speech during the 2011 International Digital Content Conference at COEX in southern Seoul, Tuesday. (Korea Creative Content Agency)
Ross is former chairman of Digital Domain, a special effects company founded by filmmaker James Cameron, and has worked for more than 100 large special effects projects worldwide. He was the technical director of special effects in “Titanic,” “Terminator 2,” “I, Robot” and “The Curious Case of Benjamin Button.”

“I’m a big fan of movies by Chan-wook Park and Joon-ho Bong. Unfortunately, no one sees them because Korean movies are made for Korea,” Ross said in a keynote speech during the 2011 International Digital Content Conference at COEX in southern Seoul.

“(The) Korean film community and content community clearly create great art. But in the stream of global content, they’ve not been a global player.”

Later in a Q&A session with the press, Ross elaborated why Korean films are not very successful in Hollywood.

He said that many Korean films fall into a few categories, including comedies, which do not translate well in other cultures.

They are good at making big special effects and action or adventure films but the content is still “very specific to Korean culture, and they’re shot in Korean language with Korean scriptwriters,” Ross said.

He took an example of director Bong Joon-ho’s “The Host.” The movie’s production budget was about $11 million, which was a relatively inexpensive movie from the Hollywood film industry’s perspective. The total box office revenue of the film reached $89 million.

However, only $2 million in revenue came from the U.S. and the rest, $87 million, mostly from Korea and Japan, he said.

“From a Korean perspective, Korea has to decide whether they want to be in ‘the show’ or ‘the business’ as in art vs. money. Produce the content in English. And it should have global content sensibility,” he said.