DAEGU -- The weather here in Daegu affected the performances of the competitors at the World Championships in Athletics.

“The humidity was higher then I expected, so I tried to walk the first half as easy as I could,” said Valeriy Borchin of Russia after successfully defending his title in men’s 20-kilometers race walk on Sunday.

The defending world champion Borchin raised his arms and pumped his fist in delight as he crossed the line in 1 hour, 19 minutes, 56 seconds, ahead of his colleague Vladimir Kanaykin, who took the silver in 1:20.27. Luis Fernando Lopez came third to win Colombia’s first World Championship medal with a time of 1:20.38. 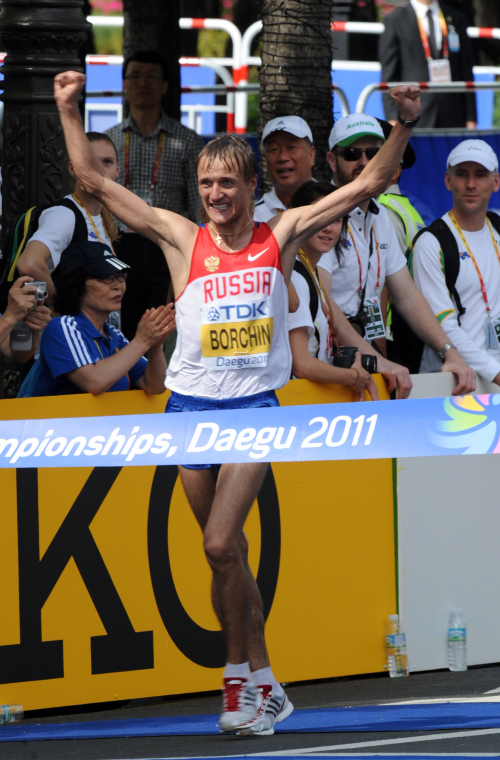 The 2008 Olympic medalist Borchin, whose personal record is 1:18.55, blamed the hot weather with 85 percent humidity for his slower time.

“The race was really difficult because today is a very hot day,” he said.

With the victory on Sunday the 25-year-old Russian has now one Olympic and two Worlds titles under his belt.

Later the day, the three fastest 110-meter hurdlers in history, David Oliver, Dayron Robles and Liu Xiang all went through their qualifying rounds comfortably, raising expectations for the final on Monday evening.

In other races, American sprinter LaShawn Merritt stunned the crowd by clocking a world-leading 44.35 seconds in his 400m heat. But much bigger applause came when South African sprinter Oscar Pistorius made history by becoming the first amputee to compete at the Worlds.

With a strong finishing kick on his blades, Pistorius swept past several able-bodied runners in the 400 meters Sunday to claim third place in the final heat of 400m and qualify for the semifinals.

“I am tired, and need to cool down now,” said Pistorius after the race. Asked about his expectations for Monday’s final, he said: “It has been a lot of pressure in the race, and there is a lot of work for tomorrow, I need to be as consistent as today.”

On the other side of the field, Russian pole vault champion Yelena Isinbayeva sailed through qualification, dispelling worries over her recent form.

The two-time Olympic champion came in fourth in last year’s world indoor championships in Doha, but on Sunday she appeared back in form, coming in at 4.55m in her first attempt, qualifying to the next round with just the one vault.

On the opening weekend of the IAAF World Championships, Kenyan women dominated the long distance events, sweeping both the women’s marathon and 10,000m to win six medals in total.

Competition favorite Edna Kiplagat claimed the first gold medal in the women’s marathon on Saturday morning. Despite a fall at the drink station, the 31-year-old crossed the line ahead of her countrywomen Priscah Jeptoo and Sharon Cherop in a time of 2 hours, 28 minutes and 43 seconds.

Cheruiyot finished in 30 minutes, 48.98 seconds, holding an edge of 1.06 seconds over Kipyego. She will be seeking a long-distance double as she also is the defending champion in the 5,000m.

Meanwhile, the host Korea, which set a goal of finishing inside the top 10 in 10 events, got off to sluggish start on the opening weekend of the championships.

The first disappointment came when national record holder Kim Kuk-young disqualified in the first heat of the men’s 100m preliminary round on Saturday for a false start.

Jung Hye-lim managed to advance into the first round of the women’s 100-meters with the third fastest time in the preliminary round, but failed to make it to the semi-finals after finishing sixth in her heat on Sunday.

Also, 110m hurdler Park Tae-kyong and 400m sprinter Park Bong-go failed Sunday to qualify to the next round. And pole vaulter Choi Yun-hee, and long jumper Jung Soon-ok were also knocked out of their qualifications.