NEW YORK (AP) -- A weakened but still dangerous Hurricane Irene shut down New York and menaced other cities more accustomed to snowstorms than tropical storms as it steamed up the East Coast, unloading a foot of rain on North Carolina and Virginia and knocking out power to 2 million homes and businesses. At least eight people were killed. 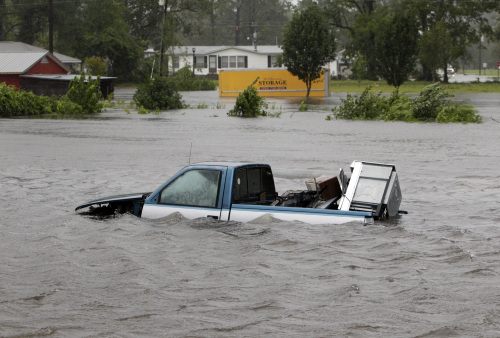 
New York emptied its streets and subways and waited with an eerie quiet. Washington braced for the onslaught, too, as did Philadelphia, the New Jersey shore and the Boston metropolitan area. Packing wind gusts of 115 mph, the hurricane had an enormous wingspan _ 500 miles (805 kilometers) _ and threatened a swath of the nation inhabited by 65 million people.

The hurricane stirred up seven-foot (two-meter) waves. At New York Harbor, even with the eye of the storm several hours away, there was a 3.5-foot (1-meter) storm surge early Sunday.

Across the Northeast, drenched by rain this summer, the ground was already saturated, raising the risk of flooding as well as the danger of trees falling onto homes and power lines.

Irene made its official landfall just after first light near Cape Lookout, North Carolina, at the southern end of the Outer Banks, the ribbon of land that bows out into the Atlantic Ocean. Although it was too early to assess the full extent of damage, shorefront hotels and houses were lashed with waves, two piers were destroyed and at least one hospital was forced to run on generator power.

``Things are banging against the house,'' Leon Reasor said as he rode out the storm in the town of Buxton, North Carolina. ``I just hate hurricanes.''

Eastern North Carolina got 10 inches (25 centimeters) to 14 inches (35 centimeters) of rain, according to the National Weather Service. Virginia's Hampton Roads area was drenched with at least nine inches (23 centimeters), with 16 reported in some spots.

Nevertheless, it was still considered highly dangerous, capable of causing ruinous flooding across much of the East Coast with a combination of storm surge, high tides and six inches (15 centimeters) to a foot (30 centimeters) of rain.

There were no hurricane-force winds over land Sunday morning; they were limited to a relatively small area over the Atlantic Ocean as the eye of the storm traveled over water after touching down in North Carolina. But tropical-storm-force winds still covered a wide area of land, and Irene was still expected to be a hurricane when its eye made landfall again in the New York area around noon Sunday.

Irene was moving north-northeast at 17 mph (28 kph), slightly faster than it had been Saturday, and was centered about 195 miles (315 km) south-southwest of New York City. A typical hurricane would be moving much faster, said senior hurricane specialist Stacy Stewart of the National Hurricane Center.

Pennsylvania Gov. Tom Corbett warned that the state will not necessarily be out of danger once the storm has passed: ``The rivers may not crest until Tuesday or Wednesday. This isn't just a 24-hour event.''

As of Saturday evening, Irene was hugging the U.S. coastline on a path that could scrape every state along the Eastern Seaboard. Ed Rappaport, deputy director of the National Hurricane Center in Florida, said it would be a ``low-end hurricane, high-end tropical storm'' by the time it crossed the New York City area late Sunday morning.

The deaths blamed on Irene included two children, an 11-year-old boy in Virginia killed when a tree crashed through his roof and a North Carolina child who died in a crash at an intersection where traffic lights were out. Four other people were killed by falling trees or tree limbs _ two in separate Virginia incidents, one in North Carolina and one in Maryland. A surfer and another beachgoer in Florida were killed in heavy waves.

Irene was the first hurricane to make landfall in the continental United States since 2008, and came almost six years to the day after Katrina ravaged New Orleans on Aug. 29, 2005. Experts guessed that no other hurricane in American history had threatened as many people.

North Carolina Gov. Beverly Perdue said Irene inflicted significant damage along her state's coast, but that some areas were unreachable because of high water or downed power lines.

At least 2.3 million people were under orders to move to somewhere safer, though it was unclear how many obeyed or, in some cases, how they could.

In New York, authorities undertook the herculean job of bringing the city to a halt. The subway began shutting down at noon, the first time the system was closed because of a natural disaster.

On Wall Street, sandbags were placed around subway grates near the East River because of fear of flooding. Tarps were spread over other grates. Construction stopped throughout the city, and workers at the site of the World Trade Center dismantled a crane and secured equipment.

New York has seen only a few hurricanes in the past 200 years. The Northeast is much more used to snowstorms _ including the blizzard last December, when Bloomberg was criticized for a slow response.

Airlines said 9,000 flights were canceled, including 3,000 on Saturday. The number of passengers affected could easily be millions because so many flights make connections on the East Coast.

In Philadelphia, Mayor Michael Nutter declared a state of emergency, the first for the city since 1986, when racial tensions were running high. ``We are trying to save lives and don't have time for silliness,'' he said.

The storm arrived in Washington just days after an earthquake damaged some of the capital's most famous structures, including the Washington Monument. Irene could test Washington's ability to protect its national treasures and its poor.

In New Jersey, the Oyster Creek nuclear plant, just a few miles (kilometers) from the coast, shut down as a precaution as Irene closed in. And Boston's transit authority said all bus, subway and commuter rail service would be suspended all day Sunday.