[ The Korea Herald – Send E-mail ]
‘Blade Runner’ Pistorius set for historic run
By
Published : Aug 26, 2011 - 18:44
Updated : Aug 26, 2011 - 18:44
DAEGU -- Walking confidently into a room of hundreds of reporters, and standing on his artificial legs molded around his knees, Oscar Pistorius says that he believes he has every right to compete against his able-bodied rivals.

Pistorius, known as “Blade Runner” for his carbon fiber artificial legs, will make history in Daegu when he becomes the first amputee athlete to compete at the World Championships in Athletics. 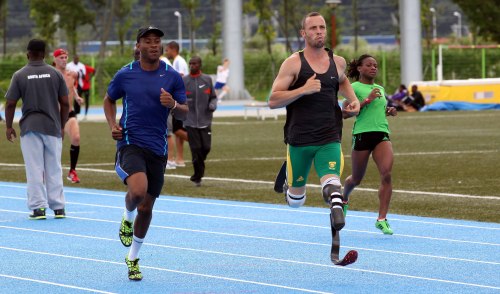 The South African double amputee “Blade Runner” Oscar Pistorius (right) practices at the Athletes’ Village training facility in Daegu on Friday, a day ahead of the start of the 2011 World Athletics Championships. (Park Hae-mook/The Korea Herald)
When the bold South African, who had both legs amputated below the knee when he was 11 months old due to a congenital condition, decided to run against able-bodied athletes the International Associations of Athletics Federations ruled against his decision, citing that his prosthetics legs gave him an advantage over others.

But in 2008, he was given the green light to attempt to qualify after the Court of Arbitration for Sport overturned the IAAF’s ruling and made him eligible for able-bodied competitions.

And the 24-year-old four-time Paralympic gold medalist has qualified for the men’s 400 meters for the Daegu World Championships following a dramatic run in Italy in July, clocking his personal best of 45.07 seconds, inside the “A” qualifying time of 45.25 seconds. The South African has also made it to his country’s 4x400 relay team at the world championships.

“I had high expectation before coming here, and now I’m physically ready to compete at the world championships,” Pistorius said.

Speaking of claims that his carbon legs may provide an unfair advantage, “I’ve been through a lot of tests and proved that I deserve my place.”

He said that his goal here is running consistently, and gaining as much experience as he can get from the competition.

“If I can come close to my record I’d be happy,” he added.