[ The Korea Herald – Send E-mail ]
Theater
By
Published : Aug 26, 2011 - 19:25
Updated : Aug 26, 2011 - 19:25
“Wedding”: Based on playwright Lee Gang-baek’s 1974 play of the same title, its musical adaptation celebrates the re-opening of the Samilro Warehouse Theater in Myeong-dong in central Seoul, which closed in February due to financial problems. Known as the very first independent theater venue in Seoul, the property has been the home to small-scale, independent theatrical activities by many performing artists and directors. After going through a renovation process supported by Taekwang Industrial, the venue had its official re-opening ceremony on Aug. 10. Its first musical after the reopening delves into the theme of marriage and life through the perspective of its young characters of the modern times. The show runs till Sept. 24. Tickets range from 20,000 won to 40,000 won. For more information, call (02) 319-8021. 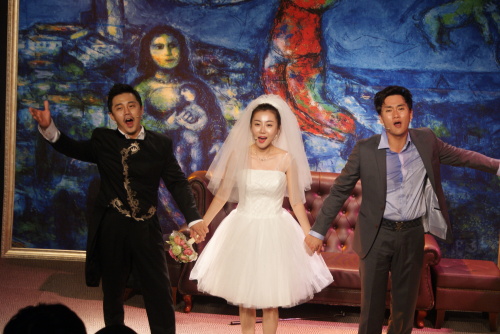 A scene from musical “Wedding,” the first musical being held at Samilro Warehouse Theater in Myeong-dong, central Seoul, after its re-opening on Aug. 10. (Samilro Warehouse Theater)
“Falling for Eve”: Actor Bong Tae-gyu, who has been playing mostly funny roles in his previous movies and TV shows, will star as the famous biblical character Adam in American playwright Joe DiPietro’s new musical “Falling for Eve.” A Rutgers University graduate, DiPietro has written many long running-off Broadway shows, including “Nice Work If You Get It” (2010), “The Toxic Avenger (2008), and “All Shook Up” (2005). He won Tony awards for the score and lyrics he wrote for musical “Memphis.” “Falling for Eve” is another version of the love story that appears in the first book of the bible. DiPietro’s Adam refuses to take the forbidden fruit from Eve, and tries to find his own paradise along with his wife. The musical runs until Sept. 11 at the M Theater of the Sejong Center for the Performing Arts. Tickers range from 30,000 to 70,000 won. For more information, call (02) 399-1114.

“Temptation of Wolf”: Based on Guiyeoni’s 2004 novel of the same title, the musical spices up the story about high school students’ love and friendship with today’s hit songs by top idol groups like Girls’ Generation, TVXQ, SHINee, and also ‘90s K-pop groups like S.E.S. and GOD. It features stars such as Ryeowook from Super Junior, Park Hyung-sik from ZE:A and singer Lim Jeong-hee. The musical runs through Oct. 23 at COEX Artium in Samsung-dong, southern Seoul. Tickets range from 30,000 won to 70,000 won. For more information, call (02) 738-8289 or visit wolf.i-pmc.co.kr.

“Guys and Dolls”: Ok Ju-hyun, the most in-demand Korean musical actress today, selected this popular romantic comedy musical based in 1929 New York, as her next show. She will be sharing the role of showgirl Adelaide with musical actor Kim Yeong-ju. Actor Jin Gu known for his impressive acting in both films and TV dramas, and musical actor Lee Yul will act as gambler Nathan. It runs through Sept. 18 at LG Art Center in Yeoksam-dong, southern Seoul. Tickets range from 50,000 won to 130,000 won. For more information, call (02) 2005-0114 or visit www.guysanddolls.co.kr.