That duo combined to help beat the team that’s been playing as well lately as any in major league baseball.

Thompson pitched 4 1-3 scoreless innings in his big-league debut, Grilli won for the first time in nearly two years as four Pittsburgh relievers combined on a five-hitter in the Pirates’ 2-0 against the Milwaukee Brewers. 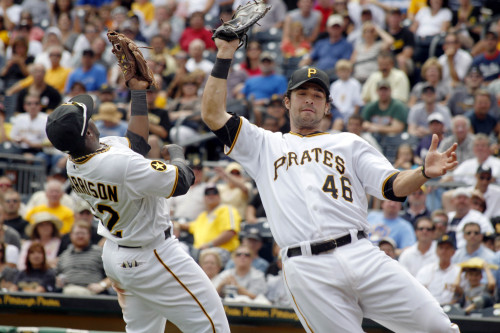 Pittsburgh Pirates first baseman Garrett Jones (right) almost runs into third baseman Josh Harrison as he catches a pop fly by Milwaukee Brewers’ Casey McGehee in the sixth inning of a baseball game in Pittsburgh on Wedensday. (AP-Yonhap News)
The NL-Central leading Brewers lost for just the fifth time in their last 29 games.

Thompson allowed four hits while walking two and striking out one. He was on a pitch count after throwing just four innings in each of his previous two minor-league starts.

“I was a little nervous but it wasn’t too bad,” Thompson said. “I got here (Tuesday) so I had a chance to get used to the clubhouse and the ballpark. I was around most of the guys in spring training and they reached out and made me feel welcome. So the nerves weren’t as bad as they might have been.”

Grilli (1-0) followed with 2 2-3 shutout innings, then Jose Veras and Joel Hanrahan finished with one inning each.

Hanrahan notched his 32nd save in 35 opportunities by striking out the side to work out of a jam. He had lost in his two previous appearances, both against Cincinnati.

Thompson, 24, had his contract purchased from Triple-A Indianapolis before the game. He was needed to fill in for All-Star right-hander Kevin Correia, who went on the disabled list Monday with a strained oblique muscle.

A first-round draft pick of the Florida Marlins in 2004, the left-handed Thompson was claimed off waivers by the Pirates from the Washington Nationals last December. He went 1-0 with a 0.77 ERA in three games, two of them starts, for Indianapolis after spending most of the season at Double-A Altoona, where he was 4-7 with a 5.16 ERA in 28 games, including 12 starts.

“Poise is the word I kept using over and over in the dugout to describe Aaron,” Pittsburgh manager Clint Hurdle said. “He had a slow heartbeat. He looked polished out there, like he had done it a number of times. He stepped into a difficult situation against a really good team and did well. We’re proud of him.”

Grilli earned his first win since Aug. 27, 2009, when he was pitching for Texas against the New York Yankees. He missed all last season after undergoing reconstructive knee surgery in spring training and pitched this season with Philadelphia’s Triple-A Lehigh Valley farm club before being granted his release and signing with the Pirates on July 21.

“I’m just thankful for the opportunity to be pitching in the major leagues again,” Grilli said. “I don’t like to think back to when I got hurt last spring but I really wondered if I’d ever play again. I put in a lot of hard work, with a lot of support from my family, and I’ve made it back.

“It’s nice to get a win again but I’d gladly give it to Aaron,” Grilli added. “It’s his day, a day he’ll never forget.”

The Pirates scored both runs on sacrifice flies, one by Andrew McCutchen in the first inning and the other by Neil Walker in the fourth. Jose Tabata had two of Pittsburgh’s four hits.