Known as the “Blade Runner” because he runs with carbon fiber prosthetic running blades, Pistorius was selected for the 400 meters and is part of his country’s 4x400 relay squad for the Aug. 27-Sept. 4 worlds. 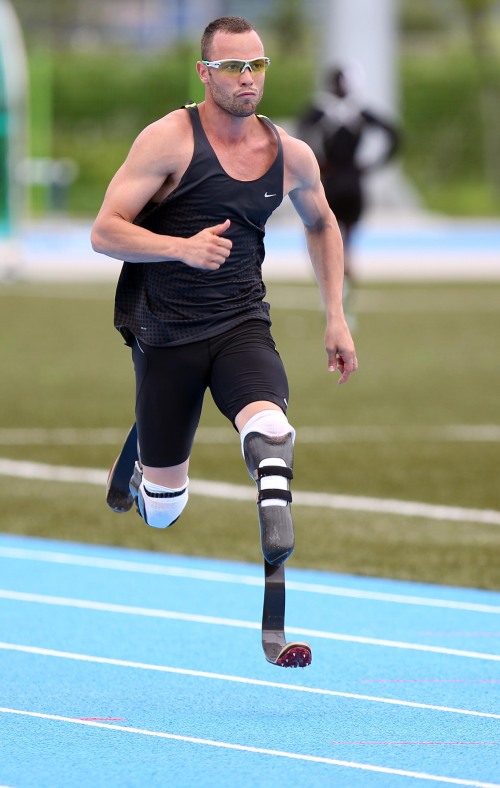 Oscar Pistorius. (Yonhap News)
Cleared three years ago to run against able-bodied athletes, the 24-year-old four-time Paralympic gold medalist left it late to qualify for the team, going under the requisite time at his final chance with a personal best of 45.07 seconds which also gives him the green light for the London Games.

“I have dreamt for such a long time of competing in a major championship and this is a very proud moment in my life. It is an honor to be representing my country at such a prestigious event,” Pistorius said.

“I hope to do my best at the competition for South Africa. I am training hard in preparation and I am looking forward to the championships immensely.

“The IAAF is a world-class governing body for our sport and I am grateful to have the chance to run in their events. It will be a great day for me when I set out on the track in Daegu and hope to do my country proud.”

Johannesburg-born Pistorius, who had both legs amputated below the knee when he was 11 months old because of a congenital condition that meant he was born without fibulae ― lower leg bones ― acknowledged that he faced an immense challenge at the worlds.

“This will be the highest profile and most prestigious able-bodied event which I have competed in and I will face the highest caliber of athletes from across the planet.

Pistorius failed to qualify for the 400m at the 2008 Beijing Olympics having been given the green light to attempt to qualify after the Court of Arbitration for Sport overturned a ruling by the International Association of Athletics Federations that his blades gave him an unfair advantage.

“We worked through that process of understanding him as a competitor, understanding the nature of melding within our championships the potential inclusion of athletes with disability,” Coe told AFP.

“That has now been resolved and I welcome Oscar to London, as I will to Daegu.”