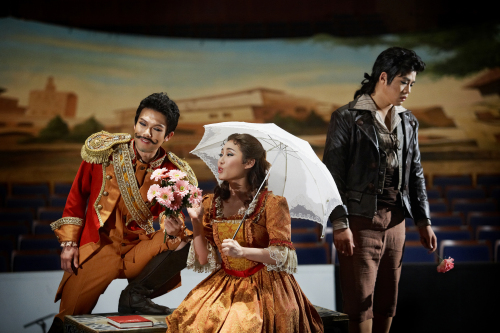 Young performers from Chugye University for the Arts practice a scene from Gaetano Donizetti (1797-1848)’s 1382 opera “L’Elisir D’amore.” (Seoul Arts Center)
“Temptation of Wolf”: Based on Guiyeoni’s 2004 novel of the same title, the musical “Temptation of Wolf” spiced up the story about high school students’ love and friendship with today’s hit songs by top idol groups like Girls’ Generation, TVXQ, SHINee, and also ‘90s K-pop groups like S.E.S. and GOD. It features stars such as Ryeowook from Super Junior, Park Hyung-sik from ZE:A and singer Lim Jeong-hee. The musical runs through Oct. 23 at COEX Artium in Samsung-dong, southern Seoul. Tickets range from 30,000 won to 70,000 won. For more information, call (02) 738-8289 or visit wolf.i-pmc.co.kr.

“Guys and Dolls”: Ok Ju-hyun, the most in-demand Korean musical actress today, selected “Guys and Dolls” the popular romantic comedy musical based in 1929 New York, as her next show. She will be sharing the role of showgirl Adelaide with musical actor Kim Yeong-ju. Actor Jin Gu known for his impressive acting in both films and TV dramas, and musical actor Lee Yul will act as gambler Nathan. It runs through Sept. 18 at LG Art Center in Yeoksam-dong, southern Seoul. Tickets range from 50,000 won to 130,000 won. For more information, call (02) 2005-0114 or visit www.guysanddolls.co.kr.

“Organ in my Memory”: Based on the 1999 Korean movie of the same title, the musical is back for a second run. It is directed by Oh Man-seok, a top musical and TV actor who in the production’s 2008 run played Mr. Kang Dong-su, a teacher in a country school with whom a girl with learning difficulties falls in love. Oh cast singer Tim and musical actor Kim Seung-dae to take the title role this time. It runs until Aug. 28 at HOAM Art Hall in Sunhwa-dong, central Seoul. Tickets range from 40,000 won to 60,000 won. For more information, visit www.musical-organ.co.kr.