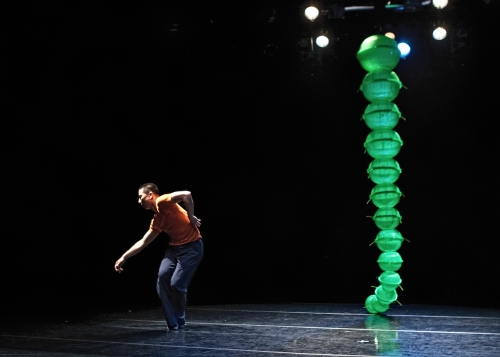 A scene from one of the performances from the “New Concept Performing Arts Festival” (HanPAC)
“Brilliant Light of Joseon Dynasty”: Samsung Dance Company stages its original dance performance “Brilliant Light of Joseon Dynasty” from Sept. 1 to 4 at the National Gugak Center in Seocho-dong, southern Seoul. The choreography is based on modernized Korean traditional dance. The performance has a story ― a mixture of truth and imagination about how the Joseon Dynasty coped with the Japanese invaders a century ago. Viewers will be able to enjoy Korean traditional dance and dynamic martial art which follow a lyrical story. Tickets range from 30,000 won to 100,000 won. For more information, visit www.gugak.go.kr.

“Miso”: Translated as “beautiful smile,” the musical “Miso” offers a compact presentation of everything Korean culture first-timers could wish for. It blends ten different kinds of traditional dances, five traditional games and a wedding ritual into the main storyline based on a well-known folktale, “The Tale of Chunhyang.” There are very few spoken lines throughout the whole performance, making it ideal for audiences of diverse nationalities. “Miso” is showing as an open run at Chongdong Theater in Jeong-dong, central Seoul. Tickets range from 30,000 won to 50,000 won. For more information, call (02) 751-1500 or visit www.koreamiso.com.