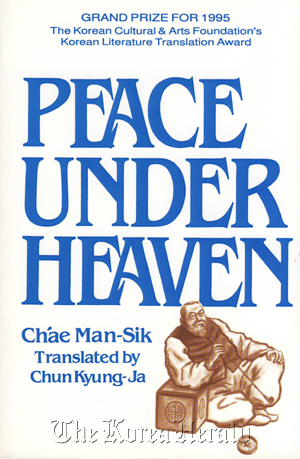 Korea’s Japanese colonial period (1910-1945) brought many changes to Korea, and one of them was the start of capitalism here. Late author Chae Man-sik’s darkly satirical novel, “Peace under Heaven” presents a portrait of an elderly man who makes wealth by exploiting his servants and workers, while hoping the Japanese rule of Korea lasts as long as possible.

Yun, a petty and shallow elderly landowner, lost his father as a group of robbers attacked their house and burnt down the property. He sobbed with his father’s dead body, wishing “everyone else” doomed while only he can prosper and make money.

Having a grudge against the Joseon authorities their inability to protect his family and property, Yun becomes extremely self-defensive and greedy for material goods.

Throughout the years, Yun made money ― in hopes of attaining Yangban (aristocrat) status ― by exploiting his tenants and servants. He feels no sense of guilt whenever he abuses his tenants, as he thinks he is being generous simply by letting them rent his property. Yun thinks it’s the Japanese that helps him protect his wealth, and wants them to rule Joseon as long as possible.

Yun’s peace of mind (the books title comes from his description of Japanese rule) is destroyed when his grandson, Jong-hak ― the only Yun family member who is portrayed positively ― is imprisoned for his involvement in the socialist movement.

“Peace under Heaven” offers a rare grasp of the hidden part of the Japanese colonial period of Korea, as people tried to gain wealth by siding with the Japanese while landowners made huge profits using their property.

Yun is portrayed as someone who is only interested in making goods for himself and his family, regardless of where his country stands with the Japanese influence. He does not understand the ethics of capitalism, while taking every possible advantage of it, as he abuses his tenants’ and workers’ Confucian virtues to save as much money as possible.

Born in Okgu in North Jeolla Province in 1902, Chae studied English literature at Waseda University in Japan but could not complete his degree because of the 1923 Great Kanto earthquake. He returned to Seoul that year and worked as a journalist from 1924 to 1936 for the Dong-A Ilbo and the Chosun Ilbo.

He made his literary debut in 1924 with his novella called “Toward the Three Paths,” and has been regarded as one of the great talents of modern literature. Chae is the first author who admitted his intentional pro-Japanese remarks in some of his work after the Japanese colonial occupation of Korea. “Peace under Heaven” was first published in 1938 and its English edition became available in 1997.