[ The Korea Herald – Send E-mail ]
Every Single Day draw hallyu fans through drama tunes
By
Published : Aug 17, 2011 - 18:33
Updated : Aug 17, 2011 - 20:11
While idol-centered K-pop has been heavily covered by the media, the Korean indie scene has received relatively little attention. This is the seventh installment of a series of interviews shedding light on the scene. ― Ed.


Rock trio Every Single Day is one of the first-generation Hongdae indie bands that formed in the late 1990s. After forming the band in 1997 in Busan, vocalist and bassist Moon Sung-nam, guitarist Jung Jae-oo and drummer Gang Moon-chul relocated to Seoul to release their debut album, “Broken Street,” in 1999.

The band recently released their fifth album “Moment” with new drummer Kim Hyo-young, three years after the fourth album “The Bright Side” in 2008. 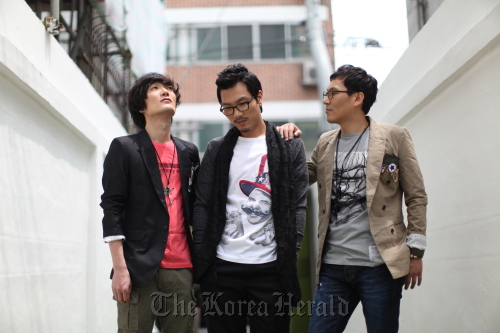 Indie band Every Single Day members (from left): Jung Jae-oo on guitar, Kim Hyo-young on drums and Moon Sung-nam on vocals and bass. (Mirrorball music)
It took three years to release a new album because Moon and Jung were busy producing the soundtrack music for the hit drama “Pasta” in early 2010 and “My Princess” in early 2011. The song “Lucky Day” and four other songs were featured throughout “Pasta” and the OST for “My Princess” included the band’s original songs such as “Falling” and “Change.”

“I guess the dramas must have been aired in Southeast Asia a lot. Many overseas fans come to our Facebook page and say they want to see our concerts,” said Jung in an interview with The Korea Herald.

“They seem to visit our page while searching the drama or learning Korean language through the drama,” he said.

Despite increasing interest from overseas, the band has not performed overseas yet.

“We want to have a show anywhere overseas, if we have a chance,” said the 37-year-old guitarist.

While their drama music was somewhat soft and romantic to fit the mood of the scenes, the band’s fifth album is full of rock spirit.

“It was quite rewarding when my music matched well with the drama scenes, while it was really hard to get our music aired on the radio or TV. But still, there is something in indie music that keeps me doing it,” said Moon, who mostly writes basic melodies and lyrics.

“Our band has a long way to go,” said the 38-year-old bassist, who teaches pop music at Dong-Eui University and Dong-Pusan College University in Busan.

Moon and Jung speak in a strong Busan dialect using tough expressions. Newcomer Kim, 33, said he feels like becoming like a Busan guy, although he is not from Busan.

“Compared to Seoul, the music market in Busan is so small that if you’re a good musician, you can easily shine there. Busan people have such a strong bond that musicians from Busan help out each other a lot,” Kim said.

“One of the remarkable strengths of indie musicians from Busan is that their musical color is very strong,” he said.

The band named the fifth album “Moment,” to appreciate every moment of their lives “every single day,” Moon said.

The first four tracks of the album are all exciting, funky, light-hearted and warm.

“Dial,” the title song of the fifth album on the fifth track, changes the atmosphere of the album with a slow beat in D minor. The lyrics ― dialing up an unknown phone number written on the receipt that drops from the wallet ― half reflects the members’ experiences of severe hangovers and half symbolizes the emptiness of the “instant human relationships” in modern society, Moon said.

Track No. 9 “I’ve Got It” is written in English by the band’s long-time American friend who teaches English in Busan.

“He even checked on our pronunciation when recording the song,” Jung said, giggling.

The band members said they want to continue their musical journey as long as they want, as they have learned how to earn money from other jobs and do their own music at the same time.

“In the early days of the band, I used to think a lot about how to earn money, while doing music. But now I think I have the guts. I will work things out anyway,” said Moon.

Jung was more ambitious, saying his dream is to sell 1 million copies of their album and perform on a stage where hundreds of thousands of audience members are present.

Kim said he wants to do more concerts with their new songs, and hopefully play overseas as well.