This includes his own cousin, the man who would be king in the unlikely event that the Iraqi monarchy were restored.

“I have read Tintin since childhood but I never made the connection with King Faisal,” laughed Sharif Ali bin Hussein, amused to learn that Belgian comic writer Herge had modeled one of his characters on his relative. 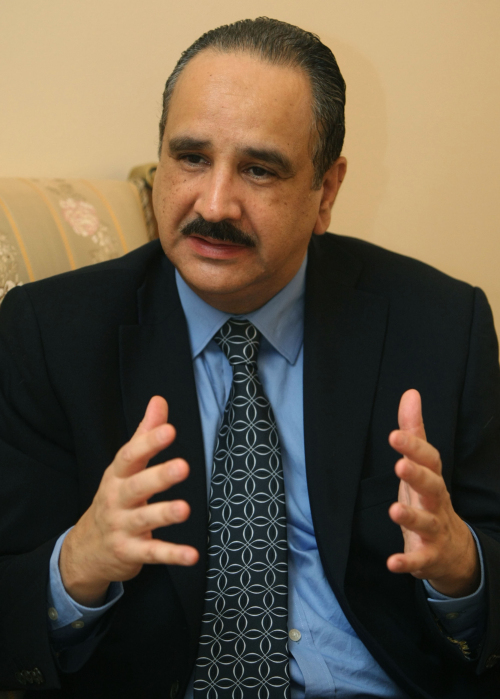 Sharif Ali bin Hussein speaks during an interview with the AFP at his home on the Tigris river in Baghdad. (AFP-Yonhap News)
On the morning of July 14, 1958, King Faisal II, who had just turned 23, was led into the palace courtyard with several family members. All were executed under the command of Captain Abdul Sattar As-Saba’a, a leader in a coup d’etat led by Colonel Abdul Karim Qassim.

Sharif Ali, Faisal’s maternal first cousin who is now in his mid-50s, was only about two at the time.

The day’s events changed the course of Iraqi history and led, in July 1979, to the rise of Saddam Hussein, whose dictatorship lasted until he himself was ousted by the 2003 US-led invasion.

But years before, the young king had captured the imagination of the West ― as well as Tintin creator Herge ― after the tragic death of his father King Ghazi in a 1939 car crash that sent Faisal to the throne at age three.

From childhood until death, the life of Iraq’s “boy king” was chronicled in photos and articles in big-name U.S. magazines like Time, Life and National Geographic.

Herge quietly drew on the anecdotes to fashion his character Prince Abdullah of the imaginary kingdom of Khemed. The mischievous Arab prince and practical joker both exasperated and charmed boy reporter Tintin and his irascible friend Captain Haddock, first in the “Land of Black Gold” (1950) and later in “The Red Sea Sharks” (1958). 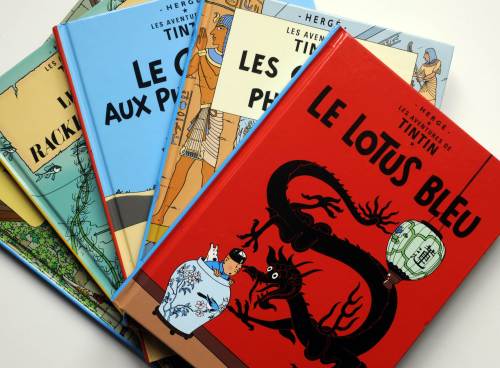 “What I know from family anecdotes is that he used to love practical jokes, which is an indication of his sense of humor and sense of fun,” said Sharif Ali at his villa on the Tigris river where framed photographs of his royal Hashemite lineage adorn the wall.

“Touch not the son of my master,” he chuckled, quoting from memory Captain Haddock when he grabs Abdullah in anger at his antics and is warned off by the boy’s Arab guardian.

The real life Faisal’s mother Queen Aliya or his English governess Dora Borland at times escorted the “boy king,” who was often photographed holding the hand of his uncle, Prince Abdulillah, who was regent until the king came of age in 1953.

― ‘Things haven’t changed much’ ― Faisal II was a regular in Life magazine, which ran a 1942 photo essay showing the seven-year-old king first in shorts on an oversized throne, then on the palace grounds with his German shepherd dog.

Three years later ― when Iraq was under British wartime occupation ― the boy is surrounded on his 10th birthday by presents from British troops: a big toy yacht, a field kitchen and a tent. And in 1946, Life captured the 11-year-old in suit and tie in the French capital. “Iraq’s boy king licks a lollipop while seeing Paris,” read the photo caption.

But it was a 1941 National Geographic story on Iraq with a picture of the “boy king,” then six, that inspired Herge, whose real name is Prosper Remi, according to a Danish expert on the Tintin creator.

“That picture was traced by Herge and made to resemble his fictional character, Prince Abdullah, the son of the Emir of Khemed,” said Frank Madsen, 49, a Danish writer and illustrator of children’s books, in an email to AFP.

“In the story Herge needed Abdullah to be kidnapped by the villain Dr Muller, so that his hero Tintin could go rescue him,” said Madsen. “As always Herge wished to surprise his readers, so he made his character Abdullah into a spoiled kid, who did not want Tintin to rescue him at all.”

Despite Tintin’s real-life connection with Iraq, his comics remain virtually unknown to Iraqi teenagers, or even to an older generation.

But as Abdullah’s character was modeled after the real-life Iraqi king, since 2003 Iraq has turned into a model of Herge’s imaginary kingdom of Khemed, whose oil riches were coveted by crooked Western oil executives and arms merchants.

In real life, arms merchants that Tintin was often trying to outfox have already done their bit in Iraq, perhaps nowhere with such unvarnished chutzpah than the $80-million no-bid contract under which British firm ATSC sold more than 1,500 fake “bomb detectors.”

At checkpoints across Baghdad, Iraqi soldiers and policemen unholster their pistol-like ADE 651 “magic wands” to scan vehicles for explosives. But the device has no power source, no real innards, and has been called a fake by the U.S. military.

At the U.S. Embassy, whose numbers will double to 16,000 personnel next year, diplomats and salesmen from American arms makers and energy firms are gearing up for business as Baghdad ratchets up oil output and revenues.

At the drop of a hat, American diplomats and military officers are ready to gush about how much has been accomplished in Iraq since the invasion.

But like Khemed, Iraq remains an oil-rich but very broken country.

Eight years after the invasion there is still no clean drinking water, state-supplied electricity comes on for only a few hours a day, corruption runs wide, and security is so tenuous that every day somewhere in the country someone is kidnapped or killed by gunmen or bombs.

“If Tintin were to come to Iraq he would probably recognize many of the same characters he used to know,” said Sharif Ali, the would-be king. “Things really haven’t changed that much.”