The Ulchi Freedom Guardian, launched in 1975 to enhance interoperability between the two forces, will continue until Aug. 26.

This year, the computer-aided exercise will mobilize some 56,000 South Korean troops and about 30,000 U.S. soldiers, including some 3,000 joining in from the U.S. and other bases around the Pacific region, according to officials here. The Combined Forces Command said the total number of participants will be more than 530,000, with seven United Nations Command sending states also involved. A CFC official said the countries are Britain, France, Australia, Canada, Thailand, Norway and Denmark. 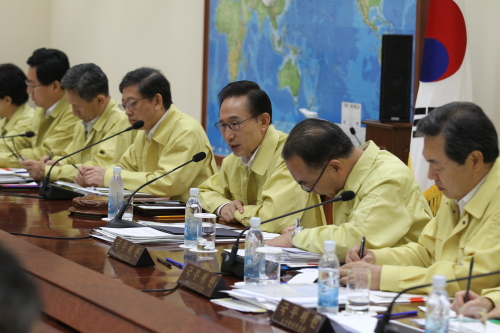 President Lee Myung-bak (third from right) presides over a Cabinet meeting at the underground war room of the presidential office in Seoul on Tuesday as the nation launches its annual war drill. (Yonhap News)
The South and the U.S. will also simulate destroying weapons of mass destruction from North Korea, officials said earlier this month.

“Through this drill, we will try to strengthen our readiness posture against threats by North Korea,” an official of Seoul’s Joint Chiefs of Staff said.

In a statement, the CFC said the UFG will look to improve the South Korea-U.S. alliance’s ability to defend South Korea “by exercising senior leaders’ decision-making capabilities and by training commanders and staffs from both nations in planning, command and control operations, intelligence, logistics, and personnel procedures.”

“It is challenging and realistic training focused on preparing, preventing and prevailing against the full range of current and future external threats to the Republic of Korea and the region,” Gen. James D. Thurman, CFC commander, was quoted as saying. “We are applying lessons learned out of Iraq and Afghanistan, as well as those garnered by the Alliance’s recent experiences with North Korean provocations on the peninsula and past exercises.”

The JCS official also said this year’s exercise will help South Korea prepare for the transfer of wartime operational command from Washington to Seoul in 2015 and alleviate concerns over a security vacuum.

According to the JCS, South Korea will conduct drills under a reformed command structure, under which chiefs of the Army and the Navy will exercise operational command.

Currently, the chairman of the JCS holds operational command in peace time. The defense ministry has proposed an altered structure so that the JCS chairman will delegate responsibilities to the heads of each branch.

If approved, the ministry’s idea will take effect in November next year.

The Koreas remain technically at war because the 1950-53 Korean War ended in an armistice, rather than a peace treaty. About 28,500 U.S. soldiers are stationed here as a legacy of the war.

North Korea has long balked at these joint maneuvers, claiming they amount to a prelude to war. Seoul and Washington, though, have countered that the UFG is defensive in nature.

Last Saturday, North Korea repeated its plea for the cancellation of the UFG. It argued that Seoul was intentionally trying to spoil the atmosphere of dialogue on the Korean Peninsula “in collusion with outside forces.”

“The joint military exercises against the North ... would further aggravate the already strained situation on the peninsula and increase the danger of a nuclear war,” an article in Pyongyang’s main Rodong Sinmun said. It added the UFG serves as proof that the South and the U.S. “do not want to see detente and peace on the Korean Peninsula.”

It followed a meeting of nuclear envoys of the two Koreas in Indonesia on the sidelines of a regional security conference.

The CFC said the United Nations Command has informed the North Korean Army, through its mission in the truce village of Panmunjom, of the “non-provocative nature” of the exercise.