Egypt played out a 1-1 draw with Brazil in the group stage, which caught Perazzo’s attention. For many, Brazil and Spain are the favorites to claim the trophy when the event ends on Aug. 20. 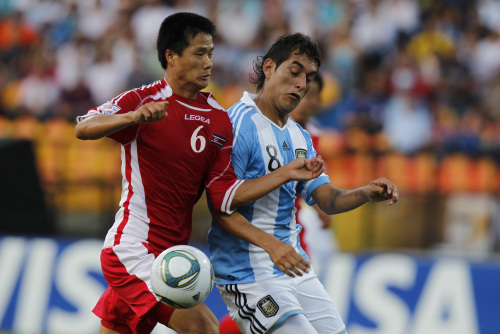 Four other matches are set for Wednesday; Nigeria vs. England, Spain vs. South Korea, Brazil vs. Saudi Arabia, and France vs. Ecuador.

“We are entering into the most risky stage where we can’t afford a mistake, where the team has to be 100 percent,” Perazzo said. “We have to be careful, but I think we are confident. We recognize, however, that Egypt played a good game against Brazil and it’s a top-notch opponent.”

Argentina will have Roma forward Erik Lamela back in the lineup after sitting out the last group match with an ankle sprain. No Argentine player has scored more than one goal in the first three matches, and Egypt is led by Mohamed Ibrahin, who has three goals.

Colombia’s team is the talk of the entire nation. The U20 side finished third in 2003, and this team has won its first three matches and could be even better.

Colombia will have home advantage facing Costa Rica, and the added edge of playing in the thin air of Bogota at 2,600 meters.

The attack is being led by James Rodriguez of Porto and Luis Muriel of Udinese. Rodriguez, by the way, pronounces his first name as “Ham-Ace” rather than the conventional English way ― “James.”

“They are going well, but don’t put this title of favorite on them,” he told the paper El Tiempo. “People are dreaming, of course. Everyone is hopeful. ... Winning is not easy these days. Football is very even.”

Mexico is another Latin American country in the last 16 ― there are seven overall, plus Spain and Portugal ― and expects to keep going in its match against Cameroon.

Mexico will need better finishing after scoring only three goals in the group round ― all against North Korea.

“We had the advantage in ball possession in all three games, and that should help us,” midfielder Diego De Buen said. “We have been dangerous, we just need a bit better play around the goal.”