Nani completed the Premier League champion’s great comeback by scoring the winner in the fourth minute of injury time. The Portuguese winger stripped City captain Vincent Kompany of the ball near midfield, ran unchallenged into the penalty area and rounded goalkeeper Joe Hart to score.

“We all believe until the last minute, and the attitude of the lads in the second half was that everyone believed we could score,” Nani said. “It is good to play against Man City and win like that. I think our fans today will be so proud of us. It is a beautiful day to enjoy.” 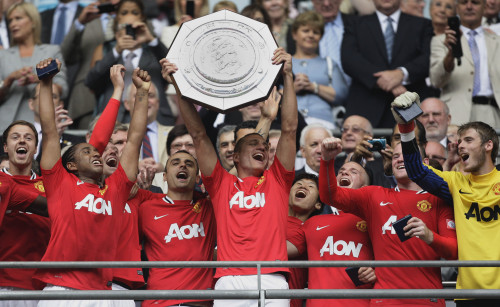 City seemed happy to settle for a penalty-kick shootout until Nani struck again before a Wembley crowd of 77,169. “I tried to chip it but the keeper stayed on his feet,” Nani said. “So at the last second I changed my mind,” Nani said.

Lescott was perhaps City’s best player in a game littered with yellow cards and rash tackles. He blocked a close shot by Smalling on the line and deflected a free kick by Nani past the post before he headed in David Silva’s free kick in the 38th minute.

City manager Roberto Mancini made sure his players returned to the field to applaud their victorious opponents.

“It is correct,” Mancini said. “It is right because they won. But we are happy because we played this game and we want to play this game every year if possible.”

Igor de Camargo capitalized on a mistake by Bayern Munich goalkeeper Manuel Neuer, scoring in a 1-0 victory for Borussia Moenchengladbach at the Bundesliga favorites.

De Camargo scored in the 62nd minute after reaching Roel Brouwers’ long ball ahead of the onrushing Neuer, Germany’s national keeper. The goalie came out too late after thinking Jerome Boateng had the ball.

Moenchengladbach escaped relegation from the Bundesliga by winning a playoff last season.

Earlier, Sami Allagui took advantage of another goalkeeping error to score for Mainz in a 2-0 home win over Bayer Leverkusen, last year’s runner-up.

An own goal from Oemer Toprak ― deflecting Marco Caligiuri’s cross past goalie Fabian Giefer ― sealed Leverkusen’s fate in the 86th minute. Giefer blundered in the 32nd when he mishit a pass across the goal. That presented Allagui with an open net, and the Tunisian striker took advantage.

Leverkusen was knocked out of the German Cup by Dynamo Dresden last week.

Saint-Etienne opened its French league season with a stunning 2-1 win at Bordeaux, and Rennes won 5-1 at newly promoted Dijon.

Saint-Etienne took the lead in the 18th minute on Michael Ciani’s own goal. Pierre-Emerick Aubameyang of Gabon made it 2-0 in the 31st with a shot that looped over goalkeeper Cedric Carrasso and bounced in off the post.

Bordeaux is coached this year by Francis Gillot and has lost key players. Last year’s coach, Jean Tigana, coach quit after his 16-year-old daughter was insulted in the stands.

Victor Hugo Montano put Rennes ahead in the 34th minute. Two minutes later, he slipped the ball to Julien Feret for a goal. Dijon’s Brice Jovial scored as the half ended.

Razak Boukari made it 3-1 in the 50th minute, beating goalie Jean-Daniel Padovani. Senegal’s Kader Mangane scored on a header for Rennes in the 75th, and substitute Alexander Tettey finished the scoring in the 85th. 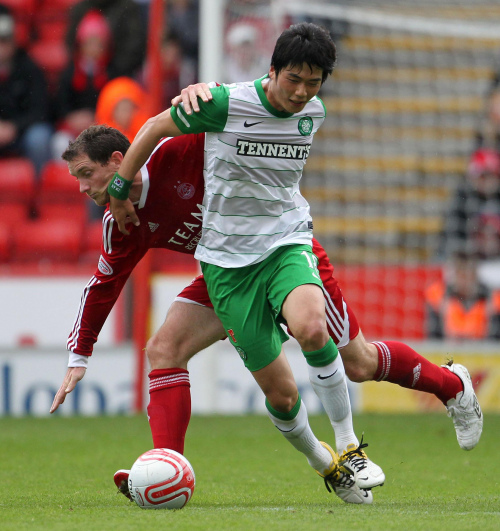 Anthony Stokes scored to give Celtic a 1-0 win at Aberdeen and second place in the Scottish Premier League.

The striker exchanged passes with midfielder Kris Commons in the 74th minute and hit a low shot past goalkeeper David Gonzalez at the near post.

Motherwell leads by a point after a 1-0 win over visiting Hearts in Sunday’s other game, but has played one game more than both the Glasgow powers.