Fears of potential fallout from the U.S. credit downgrade quickly materialized in a Korean stock freefall on Monday.

The drop reflected the panicky sentiment among local investors amid growing concerns about the overall Korean economy, widely seen as vulnerable to outside risks.

Investors in Korea and elsewhere in Asia had braced for downward pressure as the Asian markets would be the first guides as to how the downgrade would be digested. 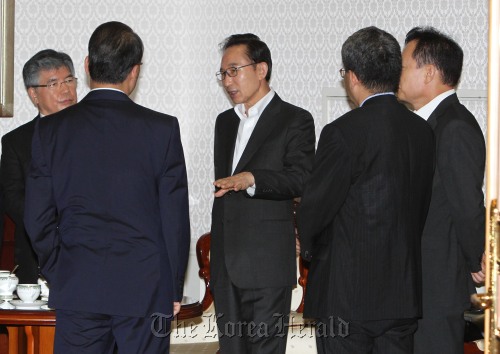 President Lee Myung-bak (third from right) holds an emergency meeting to contain the fallout of the downgrade of U.S. sovereign rating with government officials at Cheong Wa Dae on Monday. (Joint Press Corps)
Standard & Poor’s stripped the U.S. of its top credit rating of “AAA,” reducing it to “AA+” after the market closed Friday. Last week was the worst in the global equity market since the financial crisis in 2008, weighed down by problems in the U.S. and the eurozone.

The battering of the stocks also came after analysts and economists predicted that the immediate impact from the credit downgrade in the U.S. would be limited.

Lee Chul-hee, analyst at Tong Yang Investment Bank, said the downgrade is a negative factor, but its impact on the stock market, as evidenced by historical data, would be moderate in the coming months.

“Australia, Sweden, Canada and Japan saw their “AAA” rating downgraded, but their stock markets rebounded in a month or two,” he said.

But Monday’s fall on the Seoul bourse was steeper than expected, raising questions about whether investors could remain optimistic about the U.S. economy, one of the key markets for South Korea which depends heavily on exports.

One consolation is that the Standard & Poor’s downgrade was not a shocking revelation but a confirmation of the fact that the U.S. has to deal with its debt problem. Still, Washington’s capacity to handle it properly is widely questioned.

Moody’s and Fitch, the two other rating agencies, did not follow suit, assuring investors when it comes to the credibility of U.S. Treasuries.

“There is no real alternative to U.S. Treasuries,” said Moon Jung-hiu, economist at Daeshin Economic Research Institute. “China and Japan are also unlikely to start unloading their holdings in U.S. Treasuries; instead, they will use their position to secure better trade deals with the U.S.”

The eurozone, which might have been sought as an alternative, is now busy trying to contain its own sovereign debt problem that is spreading to its bigger economies like Italy and Spain.

Analysts in Seoul warned that in addition to the risk aversion caused by the U.S. credit rating downgrade, the Korean economy might find itself caught between the stronger won and sluggish demand from the U.S.

“Standard & Poor’s decision is in essence a negative factor, and the potential problem for Korea is likely to arise in the foreign exchange market,” said Kim Jae-hong, economist at Shinyoung Securities.

The U.S. dollar is expected to weaken further in the wake of the rating’s cut, which in turn could boost the value of the Korean won, making Korean goods in overseas markets less attractive.

Korean exporters are also feared to face a significant fall in demand from the U.S., which is struggling to inject fresh energy into its economy beset by a weaker dollar and the near-zero interest rate. Last week, both Goldman Sachs and Credit Suisse slashed their forecasts for U.S. economic growth in 2012, adding to concerns for Korean policymakers who tend to focus on exports as the engine of the economic growth.

Analysts said they could draw up a clearer picture when the U.S. Federal Reserve holds its policy-setting committee on Tuesday. Expectations, however, remain mixed about whether the Fed might ease monetary policy further to limit the after-effects of the downgrade of the U.S.’s top-notch credit rating.