[ The Korea Herald – Send E-mail ]
Classical Music
By
Published : Aug 5, 2011 - 18:45
Updated : Aug 5, 2011 - 18:45
“Summer Classics”: The Seoul Metropolitan Youth Orchestra is to present educational performances for students to help them understand classical music and learn classical music concert etiquette. The orchestra consists of university students majoring in classical music and has been holding annual summer classic series since 2008. The program includes “Arirang,” “Peter and the Wolf” by Prokofiev, “Nessun Dorma” from Puccini opera “Turandot,” with narration from announcer Oh Sang-jin. Conductor Park Tae-young, a professor at Suwon University, will lead the orchestra. The concerts will take place at the Sejong Center for the Performing Arts on Aug. 12-13. Tickets range from 5,000 won to 30,000 won. For more information, call (02) 399-1114. 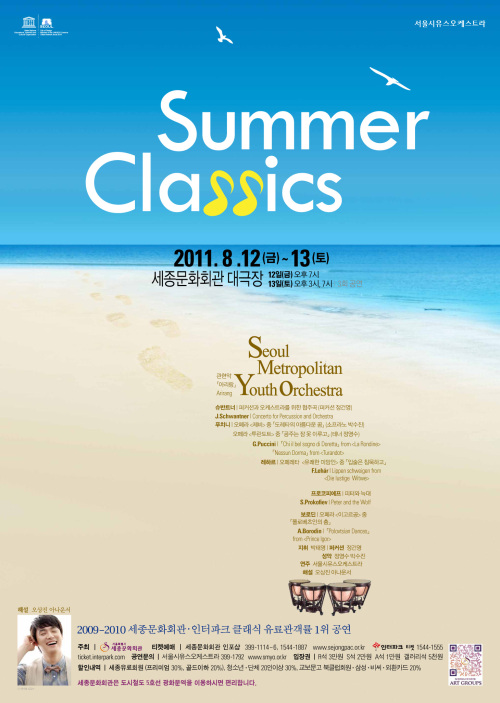 Poster of “Summer Classics” (Sejong Center for the Performing Arts)
“Daejeon Philharmonic Orchestra’s Russia Sentimental”: A special concert featuring Tchaikovsky and Mussorgsky is to be held at the Seoul Arts Center’s Concert Hall on Aug. 30 at 8 p.m. With new artistic director and conductor Geum No-sang, Daejeon Philharmonic Orchestra will deliver the unique sounds of the Russian symphony with pianist Suh Hai-kyung on Tchaikovsky Piano Concerto No. 1. The second part of the program will be Mussorgsky’s “Pictures at an Exhibition.” Geum studied conducting at Wien Music Hochschule, under Professor Otmar Suitner, the general music director and conductor of the Staatoper Unter den Linden, Berlin, from 1980 to 1985. He has been invited to conduct orchestras in Austria, Macedonia, Italy, China, Taiwan and Japan. On returning to South Korea, he conducted the prestigious KBS Symphony Orchestra and the Seoul Philharmonic Orchestra. Tickets range from 10,000 won to 50,000 won. For details, call (042) 610-2262.

“Great Mountains Music Festival & School”: Renowned and rising artists will gather for 55 programs and master classes at the 8th Great Mountains Music Festival & School taking place through Aug. 13 at the Alpensia resort in Gangwon Province. This year’s focus will be on showcasing final works of great composers when they were grappling with age or illness. Under the theme “Illumination,” the highlights of the two-and-a-half week program will include Mozart’s Requiem, Schubert’s Quintet in C Major and Mendelssohn’s rarely heard String Quintet No. 2, all of which are late works of the composers. Rising stars such as pianist Son Yeol-eum, violinist Shin Hyun-su, double bassist Sung Min-je and tenor Kang Yo-sep will also perform at the festival. Tickets range from 40,000 won to 50,000 won. Reservations can be made through www.gmmfs.com, www.clubbalcony.com, or www.interpark.com. For more information, call (02) 725-3394~5.

“Daniel Barenboim & WEDO Beethoven Symphony Cycle”: Argentine-Israeli conductor Daniel Barenboim will lead his youth orchestra, consisting of artists from the Middle East including Israelis and Palestinians. The rare concert series at the Seoul Arts Center will cover all Beethoven Symphonies from No. 1 to No. 9, from Aug. 10 to Aug. 14, except Saturday. On Aug. 14, the program will be No. 2 and No. 9, joined by soprano Jo Su-mi, mezzo-soprano Lee Ah-kyung, tenor Park Ji-min, bass Hamm Suk-hun and the Korean National Choir. Tickets range from 50,000 won to 150,000 won. For more information call (02) 318-4301. They will also perform Beethoven Symphony No. 9 in d minor Op. 125 “Choral” in Imjingak near the demilitarized zone to promote peace on the Korean Peninsula on Liberation Day on Aug. 15.