[ The Korea Herald – Send E-mail ]
Singapore nun tells of passion for taekwondo
By
Published : Aug 5, 2011 - 17:53
Updated : Aug 5, 2011 - 17:53
MUJU, North Jeollla Province ― A Singaporean nun says she is finding strength and also peace in the Korean martial art of taekwondo. Sister Linda Sim is visiting Korea with her pupils to participate in the taekwondo youth camp in Muju, North Jeolla province.

“I believe God gave me taekwondo as a gift,” Sim told The Korea Herald during her training session here on Thursday. 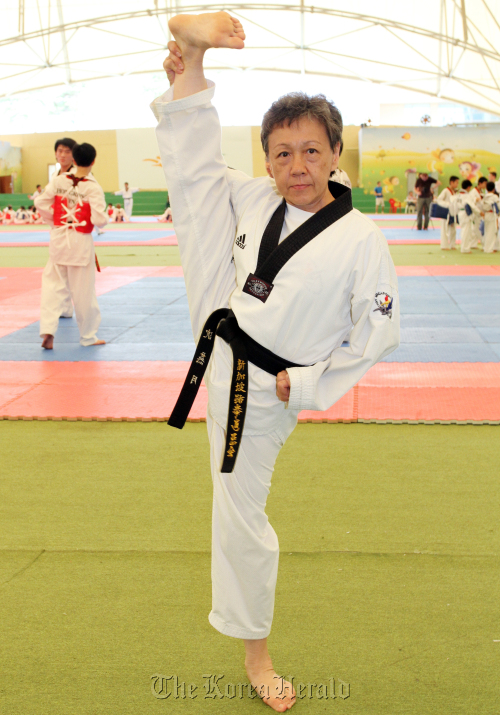 Sister Linda Sim of Singapore.(Taekwondo Promotion Foundation)
The 55-year-old said that she first started practicing taekwondo in her church when she was 17-years-old.

“I wanted to learn martial arts when I was eight, but my mother forced me to learn piano. So I waited until I became 17,” she said.

After six years of training, she was able to compete in a national championship, and won a bronze medal. From then on, taekwondo has become her obsession, she said. However, instead of becoming a taekwondo athlete she decided to become a nun.

“I had to give it up because I believed that God wanted me to serve people, to become a sister,” she said. After she became a sister of the Franciscan Missionaries of the Divine Motherhood, she was sent to England for nearly 17 years.

“I wanted to go out and practice but there was no chance, so I did carry on with my own training in my room.”

She realized again that she couldn’t live without taekwondo. Then, an opportunity came when she was back to Singapore in 2004.

“I had to come back to look after my parents in the hospital, and there I met Milan Kwee, president of Singapore Taekwondo Federation.”

In 2006, the federation started to provide a taekwondo lesson at the children hospital, run by her Catholic organization, and the president offered her the job.

“It’s really amazing to see how taekwondo help the children. It gives them confidence, gives them also mental ability to overcome their pain, suffering, and carry on training even when they were not well.”

She said she believes taekwondo is a powerful tool to unite people.

“You don’t need language, here I see so many people from around the world, and taekwondo is our language. We are all connected. Taekwondo is powerful, universal, so that is why I love it,” she added.