LONDON (AP) ― Manchester United takes on Manchester City in Sunday’s Community Shield, giving fans another chance to see if the balance of power in English football really is shifting between the clubs.

United has played in the traditional season-opener 18 times since City’s last appearance in 1973, but City’s wealthy owners have continued with the sort of investment that helped clinch the FA Cup in May.

While United collected its record 19th league championship last season, City’s first trophy in 35 years and third-place finish in the Premier League suggested that honors may soon be more evenly split in Manchester. 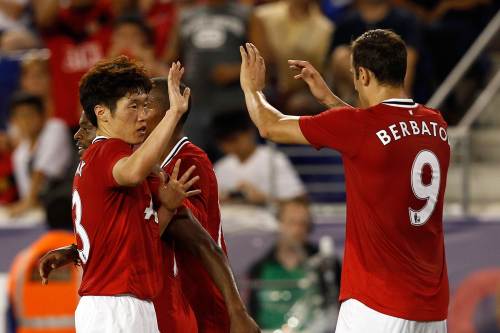 Park Ji-sung (left) and Dimitar Berbatov of Manchester United are looking to start strong in the English Premier League. (AFP-Yonhap News)
Since finishing nine points behind United in the Premier League and winning the FA Cup ― beating its local rival in the semifinals at Wembley along the way ― City has bolstered its squad with the acquisition of Sergio Aguero.

With City boasting that firepower and strengthening its defense with left-back Gael Clichy and central defender Stefan Savic, Alex Ferguson now ranks City alongside Chelsea as the team he most expects to challenge his United side for honors.

“I expected more buying,” Ferguson said. “Chelsea haven’t really been busy except with the manager, who will need time to adjust the squad he’s got. City have bought Gael Clichy and look as though they’re signing a few more.

“We expect a big challenge from those two.”

“We are all looking forward to Sergio Aguero joining in,” said England goalkeeper Joe Hart, who is again set to be City’s No. 1 this season. “I haven’t seen much of him but the little we have seen in training has been exciting.”

Aguero is set to make his debut in just the second all-Manchester shield match ― and first since 1956 ― and could be up against a reshaped United defense.

Ferguson must choose between David de Gea and Anders Lindergaard to start in goal as successor to retired great Edwin van der Sar, while defender Phil Jones may also make an appearance following his $27 million move from Blackburn.

It could be a tough first game for the 19-year-old Englishman if 30-times capped Aguero and World Cup winner David Silva are on form on the big Wembley pitch.

“We first identified Jones when he played for Blackburn’s youth team against us a couple of years ago when they beat us 3-0. He was absolutely magnificent,” Ferguson said. “You might think he might not play, but the ability he’s got and the determination he’s got, he could quite easily play.”

Ferguson may also give $28 million winger Ashley Young a chance to impress.

“Ashley can play in more than one position,” Ferguson said. “But initially we’ll start him as a wide left player.”

United’s preseason form has been difficult to read, with last month’s 2-1 win over Barcelona coming against a second-string side. City, however, was impressive in dismantling Inter Milan 3-0 last week ― without Aguero or Carlos Tevez, who wants to leave the club and isn’t expected to feature on Sunday.