BARRANQUILLA, Colombia (AP) ― Real Madrid playmaker Sergio Canales sparked Spain to a 2-0 win over Ecuador on Wednesday, booking a second-round spot at the U20 World Cup.

Surprising Saudi Arabia also advanced after routing Guatemala 6-0. Nigeria did the same by beating Croatia 5-2, while Costa Rica kept alive its hopes of reaching the second round with a 3-2 victory over Australia. 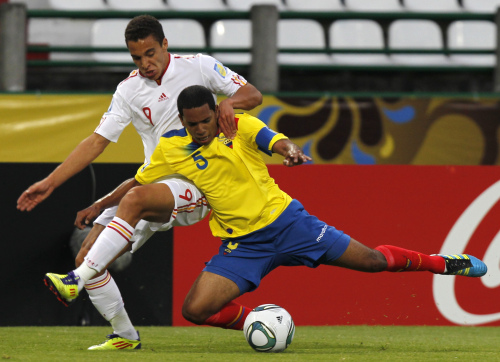 Spain’s Rodrigo (left) and Ecuador’s Dennis Quinonez battle for the ball on Wednesday. (AP-Yonhap News)
Spain struggled early against Ecuador in Manizales but picked up the pace after Canales came off the bench in the 56th minute, playing for the first time after a lingering muscle injury.

Canales scored from close range in the 67th and set up Alvaro Vazquez’s goal with a nice through ball in the 85th. Vazquez had also came in as a second-half substitute.

“I’m very happy because it’s not easy to come back from an injury,” said Canales, who had been nursing a muscle ailment on his left leg. “We played with a lot of heart in this match and now we are already through to the second round.”

Having already guaranteed its spot in the knockout stages, Spain has the option of resting its top players when it plays its last group game against Australia on Saturday, but coach Julen Lopetegui says the team will not relax.

“I don’t think we will change the way we play,” he said. “We always come out to win and that objective hasn’t changed.”

Ecuador, which will play its final group match against Costa Rica, was a man down from the 65th after midfielder Christian Ona was ejected for a second yellow card.

“We played a great match but we didn’t have enough luck to score even though we created many chances,” Ecuador coach Sixto Vizuete said. “Without disrespecting Costa Rica, we still haven’t lost anything. If we play like we played against Spain, we can think about earning four points and advancing.”