The sponsorship deal includes making the Hanwha Solar Energy brand visible at the Bundesliga club’s home stadium and on its tickets and homepage, in addition to promotional events.

Hanwha Group, one of Korea’s biggest conglomerates, has been focusing on its solar power business. 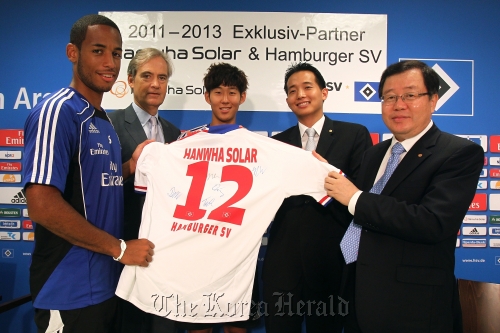 Speaking at the signing ceremony on Tuesday in Hamburg, Hanwha Chemical CEO Hong Ki-joon said: “It is our first step to introducing Hanwha Solar brand in Europe. With this sponsorship, we aim to become a global brand in the next five years.”

Hanwha has already embarked on its sponsorship program by hosting a friendly between Hamburg SV and Spanish outfit Valencia CF on Tuesday. During the special match titled “HanwhaSolar Cup,” the company was able to promote its brand with the display board and also a live TV coverage.

As part of the deal, Hanwha has promised to install solar energy system at the Hamburg stadium and the club facilities. It also plans to introduce the system to other Bundesliga clubs, and further across Germany, the company said.

The top-flight German club is one of the country’s oldest and best-established football teams. Established in 1887, the German club has always played in the top-flight league since the league’s foundation in 1963. The club has won six German championships tittles and also three FA cup titles.

South Korean international Son Heung-min is currently playing for the German outfit. Son, 19, joined the Hamburg youth team at age 16 and he made his team debut last year.

In the 2010-2011 preseason, Son scored nine goals, becoming the team’s most promising young talent. But he was sidelined for two months in early season due to a foot injury.

Despite the injury, he has made a successful return, scoring three goals in 13 games in his debut season in Bundesliga. This preseason, the teenage striker has scored 17 goals in seven games, raising high expectations ahead of the new season.

The rising young striker also made his national team debut during Korea’s Asian Cup campaign in January. Son is under contract with Hamburg until the summer of 2014.