Mexico went ahead via a North Korea own-goal in first-half stoppage time, and made it 2-0 from Taufic Guarch’s 30-meter strike in the 54th minute. Diego De Buen scored the final goal from a free kick in second-half stoppage time.

Mexico has three points from two matches and North Korea has one point from its opening draw with England. 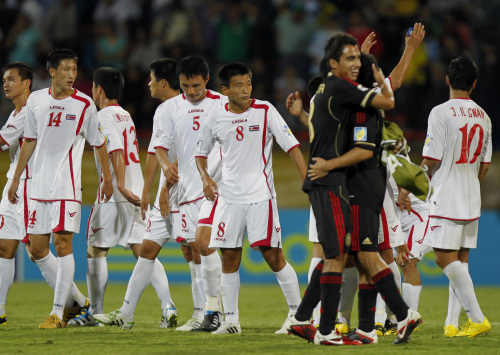 North Korean players react after losing to Mexico. (AP-Yonhap News)
Mexico faces England on Thursday in Cartegena in its final Group F game, while North Korea plays Argentina in Medellin. The top two teams in each group advance automatically and are joined in the knock-out stage by the four best third-place teams.

Argentina defeated Mexico 1-0 in the first group match and North Korea had a 0-0 draw with England.

Mexico had all the chances and hit the crossbar in the first half, but wound up going ahead on an own-goal in stoppage time by North Korean Ri Yong-chol. The play unfolded as Ulises Davila and Guarch attacked near the goal. A North Korea defender tried to clear the ball and instead kicked it at Ri, with the rebound bouncing in behind keeper Om Jin-song.

Mexico had 63 percent of the possession in the first half with 14 shots to 1 for North Korea, and the second half was similar.