Park Chu-young of AS Monaco is one of the most sought-after footballers in Korea but where he will play this season is still in doubt.

The 26-year-old striker is under contract with Monaco, but he publicly revealed his desire to leave the French club after their relegation from Ligue 1 last season. 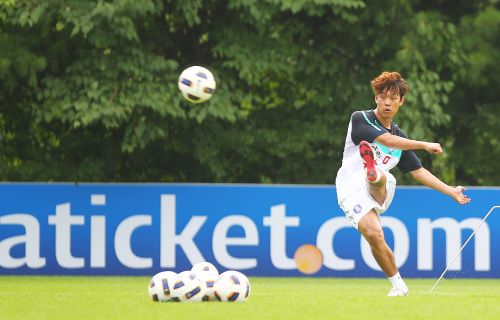 Park Chu-young takes part in a practice session at the national training center in Paju on Monday. (Yonhap News)
Since then, the Korean international, who took the captain’s armband when Park Ji-sung retired from the national team earlier this year, has been linked with a long list of European clubs this summer, including French side Lille, Paris Saint-Germain FC and also English club Bolton.

Park, most recently, has attracted strong interest from Liverpool, with the Premier League club’s director keen on bringing the Korean striker into the team to enhance their attacking lineup.

French media reports suggest that Italian club SSC Napoli are interested in signing the Korean international. He is also a target for German Bundesliga outfit Schalke.

Park has two years left on his Monaco contract but says he wants to experience Champions League football and major tournaments.

“I’d like to have a new challenge in a stronger team capable of competing in bigger European-wide tournaments,” he said through his agency earlier.

Despite his strong desire to find a new team and plenty of interest from clubs, there has been no firm deal agreed yet.

One of the difficulties for Park is that Monaco is asking a high price, estimated at $11.4 million, for the striker. And his pending military duty is another factor.

Under Korean law, all able-bodied men aged over 20 must serve in the military, with an exception of athletes who have claimed either Olympic medals or gold medals in the Asian Games. He competed at the 2010 Asian Games, seeking both gold and a military exemption, but the team was knocked out by the United Arab Emirates in the semifinals.

Park, who debuted in the K-League in 2005 with FC Seoul, joined the French league after signing a four-year deal with AS Monaco in 2008.

Since then, he has scored 25 goals in 91 league games for the French club. Last season he scored 12 goals in 33 games.

Park is currently training at the national training center in Paju, Gyeonggi Province, preparing for Korea’s international friendly against Japan next week. Asked about his future, he said Monday that he was “not worried.”

“Negotiations are well in progress, I’m not worried. The more important thing for me now is the national team’s friendly match. I want to show my best,” he said.