There are injuries and then there are injuries. Park Ji-sung often picked up a knock here and a strain there and missed two months of the season just finished with a knee problem. The Manchester United star has experienced almost everything there is to experience in English football but fortunately for him, he has never been on the receiving end of a reckless tackle like the one that broke the leg of Lee Chung-yong last Saturday.

Just a few days ago, the South Korean wideman was looking forward to a third season in the English Premier League with Bolton Wanderers and there were reasons to believe it would be his best one yet. 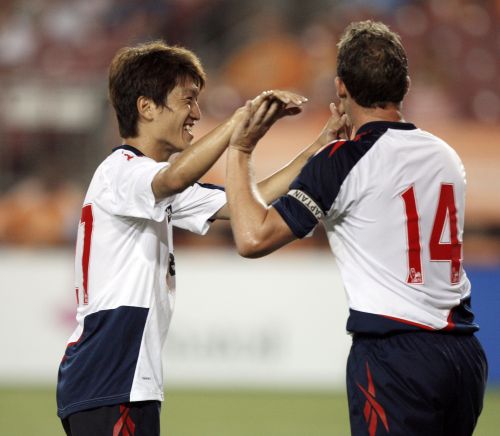 Bolton Wanderers forward Lee Chung-yong (left) was looking to build on last year’s solid season. (AFP-Yonhap News)
For the first time since he arrived in England in the summer of 2009, Lee, now 23, had enjoyed a summer of relative rest. He may have joined Bolton when the English season was just starting but Lee had already been playing for six months in Korea with FC Seoul. The next summer saw him busy at the World Cup in South Africa. So this time round he had finally taken a well-earned rest and because of this freshness, expectations ahead of the new campaign were high.

It was not just about the rest. Lee has impressed during his time in England. The messages from the player’s camp were full of optimism about the interest that some of England’s top clubs had already shown in the player and belief that he was about to show fans in the world’s most popular league what he really could do.

Bolton coach Owen Coyle said last March that Lee had the talent to do just that. “Lee will go on to play for one of the top clubs because he has everything in his locker,” Coyle said. “He has got a footballing intelligence that you can’t give players. He has an unbelievable touch; he can take the ball in tight areas. He is great to have at the club.”

A week ago, the biggest problem that Lee had was the fact that he had been summoned by the national team to play a friendly game in Japan next Wednesday, just three days before the start of the English season. Sources close to the player were happy to see him return home for the start of 2014 World Cup qualification in September but were less pleased that he was being dragged east at such a crucial time for a warm-up game for the start of 2014 World Cup qualification.

But because of a warm-up match played last Saturday in Britain, Lee’s season lies in ruins. Playing for Bolton against Newport County, Lee’s right leg bore the brunt of a rash tackle from Tom Miller in the first half and he was stretchered off the field. Such games with lower league teams ― Newport is a member of the fifth tier of English soccer ― are common for Premier League clubs but such injuries are not. These games tend to be fairly gentle affairs with the start of the season just two weeks away.

With a lower leg fracture in two places, Lee is expected to take nine months to recover. If so, he will miss all 38 Premier League games and a large part of his country’s qualification campaign for the 2014 World Cup in Brazil. For now however, the focus is on ensuring that he has a full recovery. It is going to be a tough few months for the youngster though all who know him talk of his mental toughness and his ability to settle and succeed in England, one of the toughest leagues in the world, at such a young age is testament to that.

An operation performed quickly after the game was the first step on what will be a long road to recovery. “We will make sure Chung-yong gets all the support he needs,” Coyle said. “Now it is all about his recovery and his well-being, that is the most important thing. The operation went well and we would like to pass on our thanks to the medical staff involved.”

Many players have returned from such injuries just as good as they were before. The hope is that Lee can do the same and do some as quickly as possible and resume a career that was looking very promising indeed.