For violinist Chung Kyung-wha, it was almost her first stage performance since she hurt her hand. For her elder sister, cellist Chung Myung-wha, it was the first time performing chamber music with Kyung-wha in six years.

On Friday evening, the artists showcased the first concert of Distinguished Artists Series of the 2011 Great Mountains International Music Festival & School, a major summer event for classical music lovers taking place through Aug. 13 at the Alpensia resort in Gangwon Province. 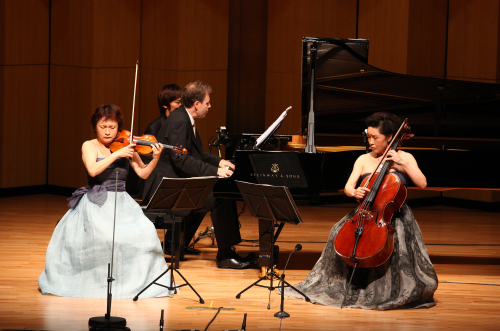 While the audience was silently waiting for the artists to begin playing, cellist Chung suddenly smiled at her sister and they swapped music stands. The audience laughed with them, briefly.

Then, violinist Chung spoke to the audience.

“It’s been so long since I performed on stage but I must tell you something before I begin,” the violinist said in a soft voice.

“We would like to dedicate this piece to victims of the flood and their families. I hope they don’t give up hope. Our heart goes out to them,” she said.

Immediately after her comments, the trio began the first movement allegro con brio with a lead of the cellist. The violinist’s powerful bowing and crystal clear melody lines followed, while the pianist supported the strings stably, not standing out.

“The theme of this festival is ‘illumination,’ focusing on music made by genius musicians after they went through a tragic period in life. And when my sister began such great music in the opening, tears abruptly flowed and I turned my face away from her not to cry,” the violinist told reporters a day after the performance.

“I really had a fantastic time on stage.”

The second movement of scherzo allegro molto changed the atmosphere of music, upbeat and catchy, with the three instruments taking turns to play brief phrases.

Moving on to the third movement in adagio, the sad harmony of the two strings filled the empty-hearted. The two sisters often made eye contact, ensuring a perfect pause and a well-timed resumption.

Then, the finale in allegro started in a minor mode. Violinist Chung’s frantically moving bow seemed like a blade cutting through the air and her emotions intensified toward the ending part, causing her to almost stand from the stool.

As the trio ended the finale with explosively playing, the audience sent enthusiastic cheers and applauds.

Chung Kyung-wha kept saying “Thank you” and even drew a heart shape in the air with her hands for the audience.

Prior to the trio’s performance, rising violinist Shin Hyun-su and double bassist Sung Min-je dazzled the audience with Giovanni Bottesini’s Grand Duo Concertante, known as the “Paganini of the double bass.” Sung was able to showcase how broadly a double bass can sing ― sometimes like a violin, sometimes like cello and other times as the deepest bass.

Pagh, the 65-year-old whose avant-garde works are more famous in Europe than in Korea, appeared on stage carrying a cane, and introduced her music herself.

“I wrote this piece in 1977 to dedicate it to my mother in Germany. As I was overcoming culture shock, I was inspired by a Korean poem by Shin Saimdang who was longing for her aged mother, and I was able to find my path of music through her poem,” she said.

Her piece started with Koh Bong-Ihn’s quiet and careful cello. Moving on to the third and fourth parts, the sounds became more traditional Korean but eerie. The clarinet some times even cried like a crow.

Meanwhile, the festival gathered renowned and rising artists for 55 programs and master classes.

Other highlights of the Distinguished Artist Series included Mozart’s Overture to The Magic Flute and Requiem, which was staged by the GMMFS Orchestra and conducted by Sung Shi-yeon, assistant conductor of the Seoul Philharmonic Orchestra, on Saturday. Pianist Son Yeol-eum, who won the second prize at the XIV International Tchaikovsky Competition in St. Petersburg in early July, performed Mozart Piano Concerto No. 23 in A major on Saturday.